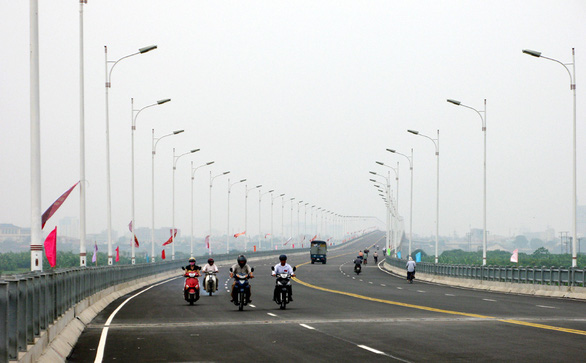 Vietnam's Ministry of Transport has revealed a plan to build 10 more bridges over the Red River to meet traveling demands of residents along the riverbanks.

Earlier, the lawmaking National Assembly Standing Committee informed the Ministry of Transport of the request of Hanoi citizens, asking for design and administrative modification of Me So Bridge -- a pending project connecting the capital’s Thuong Tin District and Van Giang District in adjacent Hung Yen Province, as well as more similar bridges over the Red River to relieve the burden on Me So.

Addressing the citizens’ inquiry, the Ministry of Transport revealed that the Me So Bridge was mapped out in Hanoi’s Ring Road 4 development plan, which is entering the pre-feasibility study phase after gaining approval from the prime minister.

The design of the bridge will be diligently researched, with factors of natural landscapes, material pricing, construction technology, maintenance and administration costs, among others, in mind.

The Ministry of Transport also disclosed a plan to build nine other bridges in accordance with Hanoi’s Master Plan on Transport Development by 2030, with a vision for 2050.

Aside from Me So, the city is preparing the construction of Hong Ha Bridge, a novel Thang Long Bridge, Tu Lien Bridge, phase 2 of the Vinh Tuy Bridge project, Thuong Cat Bridge, Ngoc Hoi Bridge, Tran Hung Dao Bridge, Phu Xuyen Bridge, Van Phuc Bridge to catch up with the growing demand for traversing the Red River of commuters.