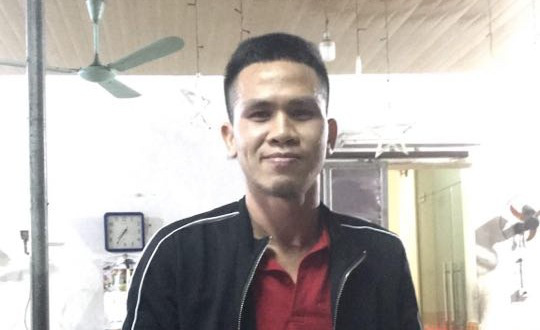 A delivery man magically caught a three-year-old girl falling from the 12th floor of an apartment building in Thanh Xuan District, Hanoi late on Sunday afternoon.

The incident occurred at the apartment building at 60B Nguyen Huy Tuong Street in Thanh Xuan District at around 5:30 pm on Sunday, Major Nguyen Minh Thang, deputy head of the police division in Thanh Xuan Trung Ward, confirmed later in the evening.

Three-year-old N.P.H. climbed over her flat’s balcony on the 12th floor of block 12A and hung there for a few seconds, according to a resident’s recorded video.

Residents at the apartment building screamed for help when they noticed the toddler’s situation.

Footage by a resident records a young girl climbing over the railing and falling from the apartment building at 60B Nguyen Huy Tuong Street in Thanh Xuan District, Hanoi on February 28, 2021.

At that time, Nguyen Ngoc Manh, a 31-year-old delivery man dwelling in Dong Anh District who was waiting for a customer at the location, heard the residents’ cry and came to H.’s rescue.

“I looked around and looked up, then I saw a baby climbing the railing on the upper floor," Manh recounted.

"Seeing that, I immediately opened the car door and tried to climb onto the metal roof [right on the ground floor of block 12A] to catch her in case she falls.

“After I just climbed onto the roof of about two meters high, I saw the baby falling.

"At that time, I slipped, but tried to extend my hands forward to reach out.

“Luckily, the baby fell into my arms. Both the baby and I fell down and slammed into the metal roof."

CCTV footage records a man catching a toddler falling from the apartment building at 60B Nguyen Huy Tuong Street in Thanh Xuan District, Hanoi on February 28, 2021.

According to Manh, blood was flowing out of the toddler’s mouth after the fall.

He immediately brought her to the ground before some residents rushed the toddler to hospital for emergency treatment.

The toddler has broken arms and legs, but her health has been temporarily stable, according to Major Thang.

For Manh, he suffered a sprain after the incident.

“My daughter is around her age," Manh said.

"Even though I had a sprain, it felt like I was able to do something meaningful.”