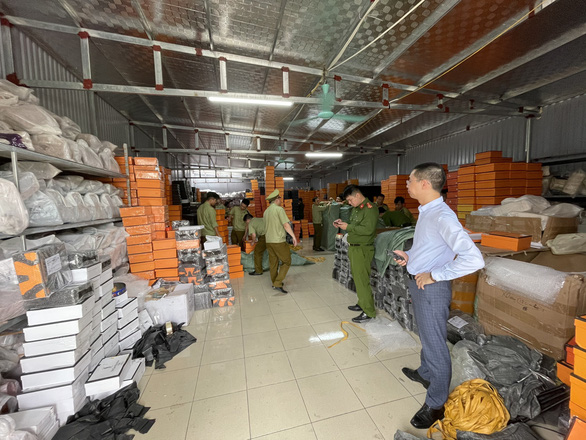 Market surveillance officials in Vietnam have mobilized ten trucks to fetch a huge volume of fake designer bags with logos from famous brands like Hermès, LV and Chanel from a warehouse in the northern Nam Dinh Province.

The clandestine depot, which was located in Vinh Hao Commune of Nam Dinh’s Vu Ban District, was busted on Wednesday after a raid by the Market Surveillance Department of Nam Dinh Province in cooperation with the local economic police officers.

Spanning over 500 square meters, the warehouse keeps around 20,000-30,000 pieces of counterfeits, the majority of which are imitations of products from Hermès, a luxury fashion brand based in Paris, France.

At the time of the search, warehouse owners failed to present any legitimate proof of purchase for the cargoes, which are estimated to worth VND6 billion (US$260,000).

Nguyen Ky Minh, deputy head of the General Department of Market Surveillance, said relevant authorities have been keeping an eye on the counterfeit racket over the last six months.

The fake bags are sold on social media using a score of different accounts that are regularly rotated to evade authority scrutiny, Minh revealed.

According to Minh, the bags are said to be showcased in a showroom on Ho Tung Mau Street in Hanoi, but all of its inventory was kept in the Nam Dinh warehouse, which obstructed the investigation of authorities.

Market surveillance officials are working to seal off the warehouse and investigate the seized products.

According to Tam Son Fashion, the official distributor of Hermes in Vietnam, products of the high-end brand name can only be found in two showrooms in Hanoi and Ho Chi Minh City, as well as Lotte department stores in Hanoi and Da Nang, plus a handful of duty-free shops.