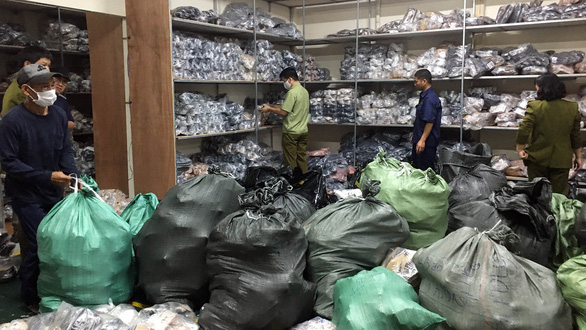 Police have exposed a warehouse in Hanoi for storing thousands of imitations of high-end brands such as Dior, Chanel, and Gucci.

The suspected warehouse, which spreads over 100 square meters at 30/56/139 Thach Cau Street in Long Bien District, was raided by market surveillance and police officers on Monday.

During their search, local authorities detected over 3,000 pairs of counterfeit shoes in the warehouse, with luxury brand names, such as Dior, Chanel, Gucci, Burberry, Adidas, LV, Zara, and Hermes, attached to them.

It took officials over four hours to sort out all knock-offs housed in the facility.

According to Nguyen Sy Binh, leader of the market surveillance unit, the force had kept tabs on the operation of the warehouse for weeks before the raid.

To evade the scrutiny of functional authorities, the owner left the warehouse closed for most of the time and just opened it briefly when cargo shipping was needed.

The proprietor was later revealed to be Bui Thi Giang, 33, who hailed from the north-central province of Thanh Hoa and failed to present any valid proof of origin for the haul.

She also admitted to having acquired the products from an unspecified source on social media.

Market surveillance officials have seized all contraband in the inventory, and are working with representatives from the brands to confirm the extent of the violations.