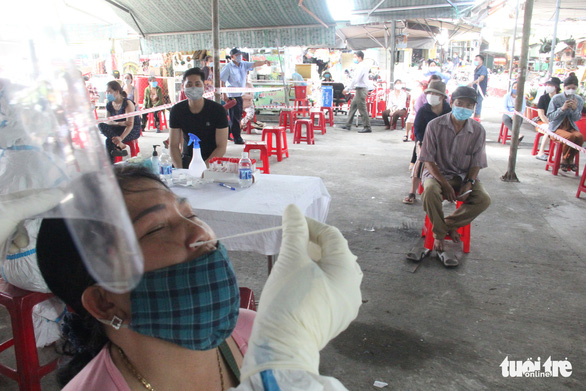 The Ministry of Health announced 181 local coronavirus infections on Monday, bringing Vietnam’s caseload to over 4,300 patients.

This is the second-biggest daily increase of domestic cases so far, according to the health ministry’s data.

Monday’s new cases were detected in areas that have been quarantined or locked down, the health ministry noted.

Ninety-seven patients were recorded in Bac Giang Province alone while Bac Ninh Province logged 49 cases. Both provinces are located in the northern part of the country.

The nation has confirmed 1,321 domestic coronavirus infections in 26 provinces and cities since April 27, when it began to deal with a fourth wave after roughly a month of no known community transmission, according to the health ministry’s data.

Health experts have said this bout is far more serious than previous waves as patients have been discovered contracting the highly contagious ‘double-mutant’ Indian variant, which has taken a toll on India in the past few weeks.

Prime Minister Pham Minh Chinh said at a meeting on Monday that the fourth wave’s source of infection came from outside of Vietnam, via immigration.

PM Chinh pointed out that there has been oversight in the country’s control over immigration and residency.

Border jumpers have been found sneaking into Vietnam from China, Laos, and Cambodia over the past months.

They made illegal entry to flee virus outbreaks in those countries and dodge compulsory quarantine in Vietnam, which requires all international arrivals to undergo different forms of isolation to prevent COVID-19 spread.

The government had administered above 979,000 vaccine shots, mostly to medical personnel and other frontline workers, by Sunday, the health ministry said in a post on its verified Facebook page on Monday morning.

More than 22,500 have been given two vaccine shots.

Vietnam has reported 4,359 local and imported infections since the coronavirus emerged in the Southeast Asian nation on January 23, 2020, including 2,668 recoveries and 37 virus-related deaths, according to the health ministry’s data.