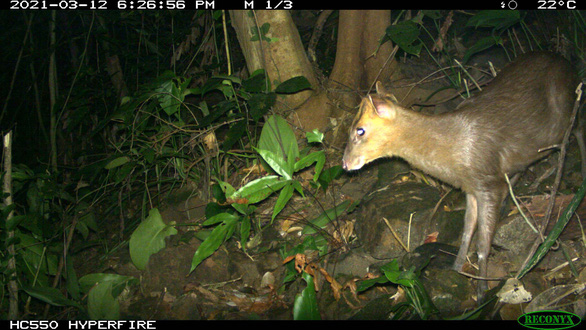 A muntjac, a rare species of deer that is endemic to Southeaast Asia, has been spotted in a nature reserve in Vietnam’s central Thua Thien – Hue Province.

Photos of a rare muntjac individual were spotted by hidden cameras and presented to Tuoi Tre (Youth) newspaper by Le Ngoc Tuan, director of the Phong Dien Nature Reserve, on Monday.

The cameras were originally placed in an attempt to spot a Lophura edwardsi, or Edwards's pheasant, another rare animal native to Vietnam’s rainforest.

The reserve’s management board and a group of conservationist from the nonprofit Viet Nature installed 110 trap cameras throughout the site and wound up snapping 11 photos of the muntjac.

According to Dr. Rob Timmins, technical director of the nature conservation nonprofit Saola Foundation, the specimen is either a Truong Son muntjac or a Roosevelt’s muntjac.

Truong Son, Roosevelt, and Giant muntjacs are all considered extremely rare, with the first two currently listed by the International Union for Conservation of Nature (IUCN) as 'data deficient' as they have never been studied alive.

Founded in 2002, the Phong Dien Nature Reserve covers an area of nearly 41,000 hectares in the Truong Son Range in Thua Thien-Hue’s A Luoi and Phong Dien Districts.

Discoveries of rare animal species in the area over the past years have prompted local authorities to devise a comprehensive conservation plan in cooperation with international organizations, aiming toward an international-level nature reserve in Thua Thien-Hue, said Nguyen Dai Anh Tuan, deputy director of the provincial Department of Agriculture and Rural Development.

The Truong Son (Annamite) Mountains, which span Vietnam, Laos, and Cambodia, are home to giant muntjacs, identified by the IUCN as 'critically endangered' in 2016, as well as other rare species in the muntjac family.

The muntjac population in the area has been severely threatened by illegal hunting, mainly with wire snares.

From 2011 to 2017, more than 100,000 wire snares were removed in Quang Nam and neighboring Thua Thien-Hue, according to online news site VnExpress.