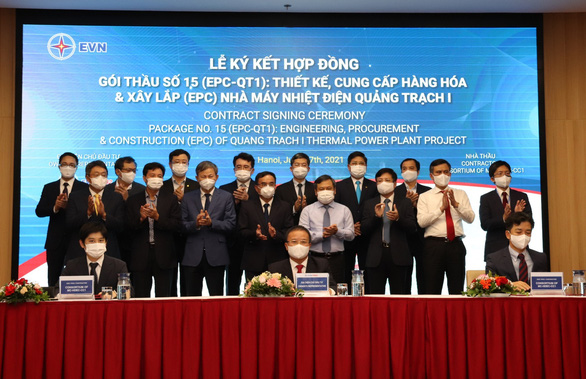 State-run electric giant Vietnam Electricity (EVN) and a consortium of contractors held a ceremony in Hanoi on Thursday to sign a cooperative agreement worth US$1.3 billion for the implementation of a package of the Quang Trach 1 thermal power plant project in north-central Quang Binh Province.

Package No. 15, with a total value of VND30,236 billion ($1.3 billion), involves engineering, procurement, and construction of two 600W generators, as well as supporting facilities at the thermal power plant.

It will be implemented by a consortium of contractors entitled MC-HDEC-CC1, consisting of Japan’s Mitsubishi Corporation, South Korea’s Hyundai Engineering and Construction, and Vietnam’s Construction Corporation No. 1 JSC.

The first unit is expected to be completed within 42 months, while the second is anticipated to wrap up within 48 months.

The project consists of two generators with the combined capacity of 1,200MW, according to EVN.

It is designed to provide 8.4 billion kWh of electricity to the national power grid each year.

With the projected specification, it will have the highest capacity among the power facilities equipped with ultra-supercritical (USC) technology in Vietnam.