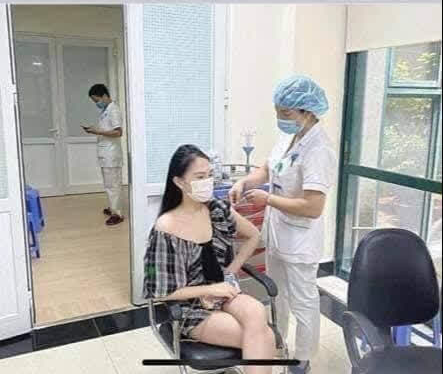 The Ministry of Health has requested leaders at Viet Xo Friendship Hospital in Hanoi to explain an accusation where a woman enjoyed an unfair priority to receive a Pfizer COVID-19 vaccine dose thanks to her father’s connections.

The order came after Vietnamese media had reported on Tuesday that V.P.A., a female resident of the capital, had shown off on her personal Facebook account she had received a dose of Pfizer COVID-19 vaccine at the aforementioned hospital without enduring registration procedures thanks to her father’s social network.

The deadline for the explanation is 10:00 am on Wednesday.

Her father had called her one day before her vaccination to inform her that the COVID-19 vaccine she would be administered was produced by Pfizer and BioNTech, according to A.’s Facebook post.

But according to the response of Nguyen Thanh Ha, director of Viet Xo Friendship Hospital, to Tuoi Tre (Youth) newspaper’s query on Tuesday, it was merely a coincidence that A. got the Pfizer vaccine dose.

“There were two odd doses of Pfizer [COVID-19 vaccine] at that time, so this woman was injected [with one of them],” Ha said.

“We affirm it is not the case that the woman was allowed to select the Pfizer vaccine at her wish,” he stated.

A.’s father, who is a lecturer at the Vietnam Military Medical University, registered for her vaccination against COVID-19 through one of his students, who is working as a doctor at Ha’s hospital.

“This woman thought she didn’t need to register, but actually her father had already signed up for her,” Ha explained.

“The woman is a reporter, so in fact, she belongs to priority groups in accordance with the regulations of the Ministry of Health,” the hospital director added.

He also said that the hospital already asked the doctor in question to make an explanation.

Over 4.3 million vaccine shots have been administered to medical workers, teachers, factory workers, journalists, and other frontline staff since Vietnam rolled out inoculation on March 8.

About 317,000 people have been fully vaccinated.

Since April 27, when the pandemic’s fourth wave appeared in Vietnam, the country has documented 61,940 domestic cases.