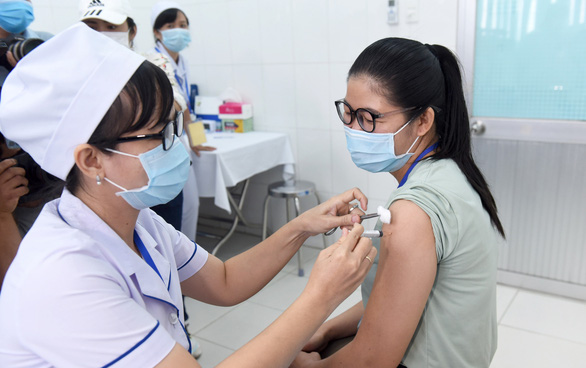 Vietnam’s COVID-19 vaccine candidate Nano Covax has entered the third clinical trial phase, with both the injection and nasal pray forms to be put to the test, the producer told Tuoi Tre (Youth) newspaper on Friday.

According to Nanogen Pharmaceutical Biotechnology JSC, Nano Covax’s producer, their vaccine is Vietnam’s first homegrown COVID-19 jab that was approved for human clinical testing, with a projected total of 14,000 people participating in three rounds of trial.

While the first round, which started in early 2021, included 60 volunteers, the third round that commenced in June is divided into two phases: the eariler phase 3a includes 1,004 participants, while the later phase 3b will have 12,000 people.

On July 27, the Military Medical University started administering the second jab to 12,000 participants of phase 3b, while those in phase 3a, who had all received two shots, were going through a blood sampling process for vaccine efficacy assessment that lasts until early August, local media reported.

Researchers are also scrambling to complete reports on the third clinical trial phase to meet the Ministry of Health’s deadline on August 4.

In the meantime, Vietnam's ambassador to India has been given the greenlight to negotiate Nano Covax testing in India, a Nanogen representative revealed.

Several foreign governments have shown interest in either procuring the Nano Covax vials or acquiring the manufacturing technology, the representative added.

The manufacturer is expecting to present their vaccine in two forms: injection doses and nasal sprays.

As the current legal framework is pushing back the launch of the vaccine due to strict requirements on testing and proof of efficacy, the prime minister has urged the Ministry of Health and the Ministry of Justice to untangle regulations in favor of the Nano Covax approval.

The registration of the vaccine is expected to be done between August 15 and 20, as announced at a meeting on Friday between Prime Minister Pham Minh Chinh, representatives from designated ministries, and the COVID-19 vaccine developers in Vietnam.

In the near future, four vaccines will be manufactured in Vietnam, of which two are domestically developed while the others are to be produced from technology transfer, the meeting was told.

Besides Nano Covax, the second vaccine is Covivax, developed by the Nha Trang Institute of Vaccines and Medical Biologicals, is set to enter the second-phase clinical trial.

Among the two vaccines based on technology transfer, one will come from cooperation between Vietnamese conglomerate Vingroup and U.S.-based Arcturus Therapeutics, and the other is the result of an agreement between the two Vietnamese developers, AIC and Vabiotech, and their Japanese partner, Shionogi.

In addition, under a deal with the Russian Direct Investment Fund, Vabiotech has packaged Russia’s Sputnik V vaccine since July, with an expected capacity of five million doses per month, getting closer to the transfer of production technology with a scale of 100 million shots per year.

The Southeast Asian country has set a target of securing at least 150 million vaccine doses to vaccinate two-thirds of its population of about 98 million people by the first quarter of next year.

More than 6.2 million vaccine shots have been administered in the country since inoculation began on March 8, with 620,611 people fully vaccinated.

The country has recorded 146,249 local infections in 62 out of its 63 provinces and cities since the fourth wave began on April 27.