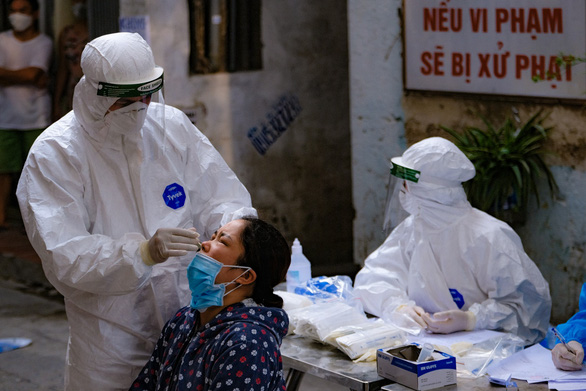 -- Binh Duong Province on Monday put into operation a new field hospital with 3,000 beds, which is the fourth of its kind in the province, in Lai Uyen Town, Bau Bang District.

-- Ho Chi Minh City authorities on Monday approved a proposal by the municipal Department of Industry and Trade to allow a number of employees of supermarkets and convenience stores to commute from 6:00 pm to 6:00 am so that they can have more time to prepare goods and disinfect the shopping venues.

-- Lawyer Vo Duc Duy, a Vietnamese national in the U.S., and his colleagues have expressed their wish to present 50,000 vials of Moderna COVID-19 vaccine to Ho Chi Minh City, the Vietnam News Agency reported on Monday.

-- The General Hospital of the southernmost province of Ca Mau on Monday sent two doctors and four nurses from its intensive care ward to Ho Chi Minh City to support Cho Ray Hospital with COVID-19 treatment, following a call for help from the latter infirmary.

-- Vietnam exported US$9.58 billion worth of wood and wooden products between January and July this year, marking a year-on-year increase of 55 percent, the Vietnam News Agency quoted the General Department of Customs as saying on Monday.

-- Two Vietnamese movies including 'Memento Mori: Water' directed by Marcus Manh Cuong Vu and 'If Wood Could Cry, It Would Cry Blood' directed by Nguyen Phan Linh Dan have been chosen among 26 official selections for the Busan International Film Festival’s Asian Project Market 2021, the film fest announced on its website on Monday.