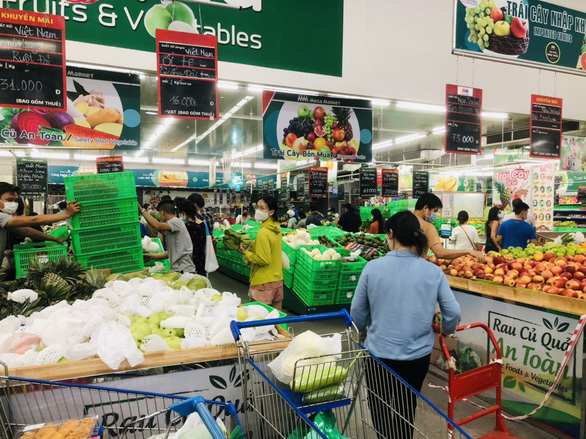 The municipal authorities have asked people to stay where they are from August 23 to September 6, underlining “each home, company, and factory should be an anti-virus fort.”

It is the most assertive measure yet that authorities have taken to curb the serious fourth outbreak.

According to their announcement, city residents will not be allowed to go out for food and must rely on local task groups to deliver the items they need.

As a consequence, supermarkets will close their in-person shopping operations, only taking orders from authorized officers.

Big supermarkets, such as Satra, Saigon Co.op, AEON, and MM Mega Market, have confirmed their plan to keep up operation, with a multitude of new essential item combos announced to local-level special cohorts on Sunday.

Grocery store chain Satrafoods will keep 120 out of its 188 locations open since Monday, according to a company representative.

These stores are located in ‘green zones’ and ‘red zones’ — two out of the city’s area classification system that includes red, orange, yellow, and green zones, with the warmer colors representing more serious levels of infections.

Meanwhile, other stores are closed due to their incapability to mobilize employees for the 'three-on-the-spot' model, where workers do job tasks, have meals, and rest after work in the same place to reduce COVID-19 transmission.

The store chain has also devised six combo packages, offering necessities such as vegetables, meat, and eggs at an average price of VND300,000 (US$13) before presenting them to customers on Sunday.

Based on these combos, volunteer groups of each neighborhood will collect orders from households so that the ward-level officers can quantify local demand before 9:30 am every day.

These orders will subsequently be sent to the supermarkets, which will pack items and get them ready for delivery before 11:30 am.

Customers can collect and pay for their items when the delivery arrives the next morning.

Satrafoods' rival Lotte Mart is also operating in the combo-exclusive model during the next two weeks of shelter-at-home.

“Since the supermarkets must operate following the ‘three-on-the-spot’ mode as required by authorities, we must carefully distribute our manpower,” a Lotte Mart representative said.

According to the staff, 10 percent of Lotte Mart staffers are allowed to travel for item delivery during the city’s movement curb hours from 6:00 pm to 6:00 am the next day.

The firm is also liaising with authorities to outline its capability to appease market demands in the upcoming weeks.

In the meantime, retailer AEON Vietnam is working with the Ho Chi Minh City Department of Industry and Trade, as well as leaders of Tan Phu and Binh Tan Districts to complete the last preparation steps.

Though it had yet to receive orders from ward-level officers on Sunday, MM Mega Market Vietnam has declared continued operation during the stay-at-home period, showing its readiness to fulfill item demands from ward authorities.

“The demand for grocery combo packages will pick up a few days into the stay-at-home mandate, as residents will have used up their stocks by then,” an MM Mega Market representative anticipated.

According to the economic office of District 8, five retail distributors, including San Ha, Bach Hoa Xanh, Saigon Co.op, and Satra, will stay open to fulfill grocery demands for the whole district during the next weeks.

According to statistics, the locale is home to 108,000 households, with 47,000 considered financially struggling during the pandemic who will benefit from relief packages during the stay-at-home bout.

The remaining 61,000 households will have the choice to use authority-operated food delivery services, which will offer 12 combos in categories of veggies, spices, tube roots, fish, cleaning supplies, and household items.

Distributors will quote the same price for items in the same category, as it will help streamline administrative work for officers when they collect orders from residents, the representative stated.

District 8 is prepared to fulfill 4,000 combo orders per day, he added.

As per Ho Chi Minh City's guidelines, the government-run grocery shopping services will be carried out by the local logistics team, the community COVID-19 prevention team, local volunteer forces, police forces, and the military.

Pre-empting the mandate, many suppliers have stocked up on essential items such as rice, eggs, and meat.

According to Nguyen Ngoc An, director of food company Vissan, the firm has increased fresh meat supply to 80 metric tons per day to appease market demand and may hike their outlets even more, as their meat supply and reserves are steady and their workers are back to work.

According to An, relevant authorities should speed up the approval and issuance of a travel pass for essential workers so that firms can realize their delivery and production plans.

“The supply will become stable once local authorities assist in delivering grocery from retailers to consumers,” An said.

Other store chains have also promised a stable supply of essential items, as well as a capability to respond to market fluctuations.

An employee of grocery supplier Bach Hoa Xanh revealed that although the supply is secured, the chain may distribute less fresh food with short shelf lives to measure market demand before deciding to increase the stock.

Stores in their chain can also share their reserves to match the realistic buying power in each area.

Other stores pointed out that the working procedures in many locales are still complicated and ineffective.

"The city must provide more guidance for the delivery plan to work during the next 14 days of social distancing,” a supermarket staff said.