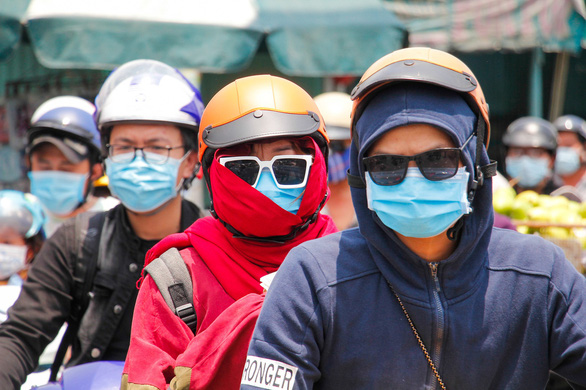 Residents in many localities of Vietnam have been advised to protect themselves from unusually high ultraviolet (UV) radiation, which is expected to last through the first half of this week.

The UV index in northern provinces will rise to unhealthy levels during the next few days, said the National Center for Hydro-Meteorological Forecasting.

Meanwhile, radiation readings in southern provinces reached a ‘very high’ level on Monday before descending to the ‘high’ parameter over the next two days — except for Ca Mau City in the namesake southernmost province, where the sun index will stay very harmful from Monday to Wednesday.

As per the World Health Organization's Global Solar UV Index, UV levels are measured on a scale from 0 (low) to 11+ (extreme).

A UV index of six and seven is considered 'high' and eight to ten is ‘very high,' where people’s skin may get burned in less than 25 minutes.

Meanwhile, the level of 11 and more is considered ‘extreme’ and may cause burns to fair-skinned people in under 10 minutes.

Outbursts of UV radiation may also exacerbate the impact of dry eye syndrome, a condition that tends to affect office workers who work long hours with computer screens.

Health experts recommend that citizens add intakes of Omega 3 to their diets through supplements or dark-colored veggies such as tomatoes, watercress, gac fruits or papayas.

They should also maintain a healthy diet, exercise regularly, drink at least two liters of water per day, wear sunglasses, and avoid going out at midday, when UV radiation is the most harmful.

It is also recommended that residents opt for glasses that are able to block at least 99 percent of UV rays, which can help prevent eye wrinkles and cataracts.