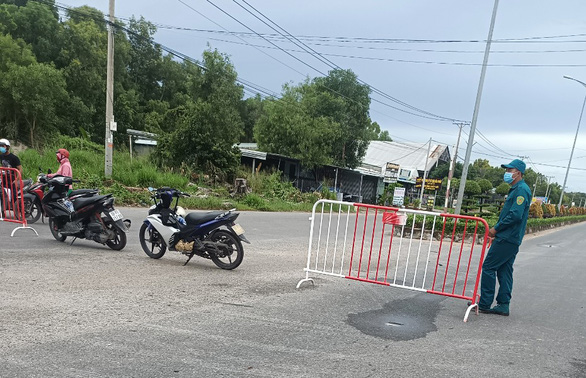 Authorities of Phu Quoc City on Wednesday announced an additional 13 coronavirus infections, bringing the total number of cases related to its first-ever COVID-19 cluster that was detected two days ago to 30.

The 13 cases were confirmed by Pham Van Nghiep, deputy chairman of the People’s Committee of Phu Quoc, an island under the administration of Kien Giang Province in southern Vietnam.

Earlier, they had been considered at high risk for their direct contact with confirmed cases of an infection cluster, which was discovered only hours after social distancing regulations had been relaxed on Phu Quoc on Tuesday.

This is the first-ever community infection chain in the island city since the pathogen emerged in Vietnam in early 2020.

All cases currently on the island can be traced to H., a 45-year-old woman in An Thoi Ward, who tested positive for COVID-19 on Monday after going to a local medical station over a prolonged cough and fever.

Subsequent screening found that N., H’s husband, as well as eight other people working closely with him at the local Vinh Dam Port also contracted the disease.

The cluster prompted functional forces to roll out extensive measures, taking 505 samples from people living in the same area as the infected cases and 1,200 others from residents of An Thoi Ward for COVID-19 testing.

On late Tuesday night and early Wednesday morning, local authorities issued urgent announcements to look for individuals who visited high-risk areas in An Thoi Ward between September 7 and 21.

Functional forces are also searching for people who came into contact with T.H.T.T., tbe 35-year-old owner of a popular eatery on Phu Quoc’s Nguyen Trai Street that serves hundreds of customers per day.

Meanwhile, the high-risk area of Vinh Dam Port is also tightening safety mandates, according to a representative of the facility owner, Toan Hai Van Company.

Crew members must have valid coronavirus-negative test results before their ships reach the port, according to the company.

They are neither allowed to leave their ships nor contact the porters during cargo unloading.

On Wednesday morning, all staffers of the port were put through COVID-19 screening and had negative results.

The administration of Kien Giang just downgraded social distancing regulations in Phu Quoc City and nine districts from the prime minister’s Directive No. 15 to the loosened Directive No. 19 from 0:00 on Tuesday after detecting new cases mostly in zoned-off areas in the preceding seven days.

However, An Thoi Ward has been put under the stringent Directive No. 16, which bans all non-essential businesses and travels, after the new cluster emerged.

The detection of the chain is likely to dampen a plan mapped out by the central government, ministries, and Kien Giang Province authorities to reopen tourism activities and welcome international tourists back from next month.