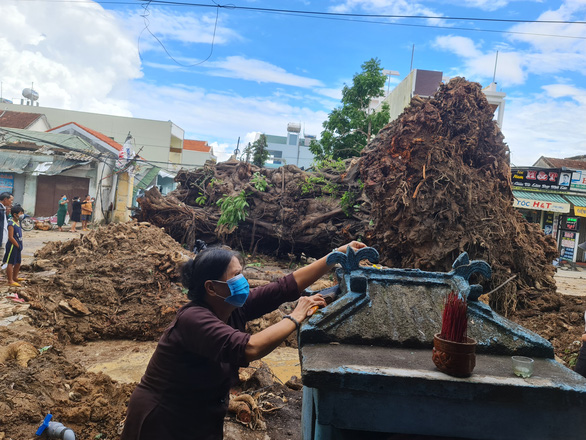 Authorities of Quang Ngai City, the capital of the namesake province in central Vietnam, have mobilized manpower to move a 200-year-old banyan tree to a new location after it toppled, killing a woman.

The banyan tree, which spans four meters in diameter, twenty meters in length, and weighs some 120 metric tons, fell on Tuesday morning, crushing a woman passing by to death.

Following the accident, an impromptu survey showed that local residents wished to save the tree, an icon of the locale, and carry out worship rituals for it as prescribed by local traditions.

Both suggestions were accepted by city authorities, who mobilized tow trucks and dozens of workers to convey the tree from Nguyen Van Linh Street in Quang Ngai City to the nearby Thien But Mountain on Saturday.

The forces showed up at the scene one day earlier to trim the tree roots and dress the wounds to increase its chance to recover.

Meanwhile, local residents on Saturday prepared a worship ritual to bid farewell to the sacred tree before it left the place.

Given the size and weight of the trunk, functional forces had to lift electric wires and Internet cables up to make way for the tree to leave the city's downtown.

It took them some three hours to send the tree from its original location to Thien But Mountain, which is five kilometers away.

“We had to deploy three heavy-duty tow trucks, with two lifting the root and one on the other end, to put the tree on a container truck,” said Le The Tao, director of T-T-T Company, who was responsible for the relocation of the tree.

“The limited space in the city, coupled with the tree’s weight, posed many challenges for us.

“We’re glad that we could wrap things up in a day.”

“In honor of our predecessors and for the benefit of the upcoming generations, it is our responsibility to save the tree,” said Ha Hoang Viet Phuong, chairman of the Quang Ngai City People’s Committee, of the successful relocation mission.

The tree will be taken care of by the Quang Ngai Province Urban Environment Company and the local Ornamental Creature Association after it gets replanted on Sunday, Phuong added.

Capable of surviving centuries, banyan trees are planted in various areas of Vietnam for shade and are often associated with spiritual values, oftentimes representing the Protective Genie of a village.

However, its root system tends to spread aerially and rather shallow, which makes it susceptible to uprooting accidents during storms and gale winds.