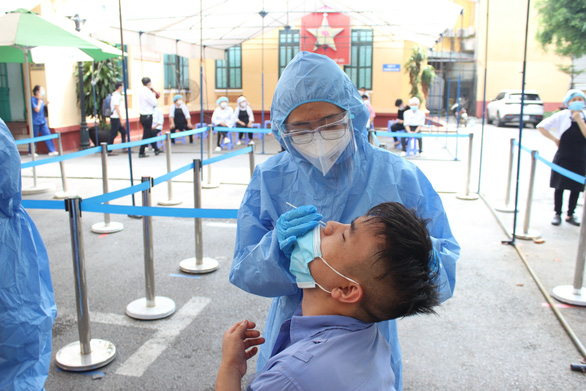 The Center for Disease Control (CDC) of Hanoi said on Saturday morning that it logged 17 more COVID-19 cases at the Viet Duc University Hospital, bringing the total community transmissions related to the venue in the past two days to 20.

The three former cases were detected on Thursday and Friday.

The People’s Committee of Hoan Kiem District, where the hospital is located, directed the local medical center to work with the CDC to seal off and disinfect the entire Building D of the hospital following the detection.

The CDC also documented five other cases from north-central Ha Tinh Province, northern Nam Dinh Province, and northern Hung Yen Province, all of whom had either undergone treatment or taken care of their family members on the seventh and eighth floors of Building D at the hospital previously.

It requested authorities in all districts of Hanoi to make a list of people who had visited the Viet Duc University Hospital from September 15 to Thursday.

More than 8,860 people, including over 4,860 residents of the capital city, were believed to visit the infirmary during that period, according to the CDC.

Competent agencies are quickly tracing, testing and quarantining those concerned to prevent the virus from spreading in the community.

The Ministry of Health on Friday evening requested the municipal Department of Health and People’s Committee to set up centralized quarantine facilities as soon as possible.

The Viet Duc University Hospital is a special-class hospital in Hanoi.

About 600 doctors and nurses, equivalent to nearly one-third of the total number of its medical staff, left for Ho Chi Minh City in August to assist at the rehabilitation center for COVID-19 patients in Binh Chanh District.

Hanoi has reported 4,221 local COVID-19 cases since a new wave of infections began in Vietnam on April 27.

Over 5.8 million of its eight million population have been given at least one COVID-19 vaccine dose.

The city had applied various social distancing levels since early July and just lossened the curbs on September 21.

Vietnam has confirmed 793,149 community transmissions in 62 out of its 63 provinces and cities in the ongoing bout.