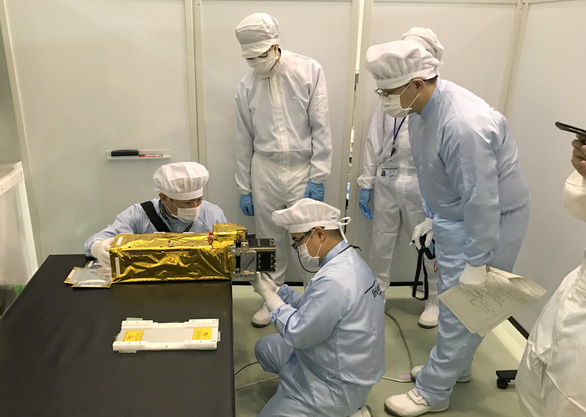 The Japan Aerospace Exploration Agency (JAXA) has cancelled the launch of its Epsilon 5 rocket, expected to carry Vietnam’s NanoDragon satellite that was built completely at home into the outer space, with reasons remaining unidentified.

The 3.8-kilogram device was due to go into orbit by Epsilon 5 rocket from the Uchinoura Space Center in the town of Kimotsuki, Kagoshima Prefecture, at 8:00 am Friday morning, along with eight other satellites of Japan.

Tens of thousands of Vietnamese and Japanese space science enthusiasts watched live reporting from the JAXA on many platforms.

However, the lift-off could not take place as scheduled due to unknown reasons.

After the inspection, the agency decided to suspend the launch event.

The JAXA will announce the reason for the halt as well as the next launch schedule later.

NanoDragon would have been Vietnam’s third satellite to go into space if there had not been the suspension.

A ground station to operate the satellite after launch was already built at the VNSC headquarters at Hoa Lac Hi-Tech Park in Hanoi.

The satellite was delivered to Japan on August 11 and tested at the Uchinoura Space Centre in Kagoshima prefecture before being transferred to the JAXA for launching.

NanoDragon, a nano-class cubesat satellite with standard dimensions of 3U (100 x 100 x 340.5 millimeters), can use micro-satellite beam technology to receive Automatic Identification System (AIS) signals that serve the tracking and observation of activities at sea.

It is expected to operate in a solar synchronous orbit at an altitude of about 560 kilometers from the earth.

Having passed all quality tests in Japan, it is an outcome of a project to create a nano-scale satellite under the national space technology program during the 2016-20 period.

All stages of the project, from researching to testing the satellite’s functions, were completely carried out in Vietnam by VNSC researchers.

Before NanoDragon, the VNSC successfully built and blasted off two other satellites, including one-kilogram PicoDragon in August 2013 and 50-kilogram MicroDragon in January 2019.