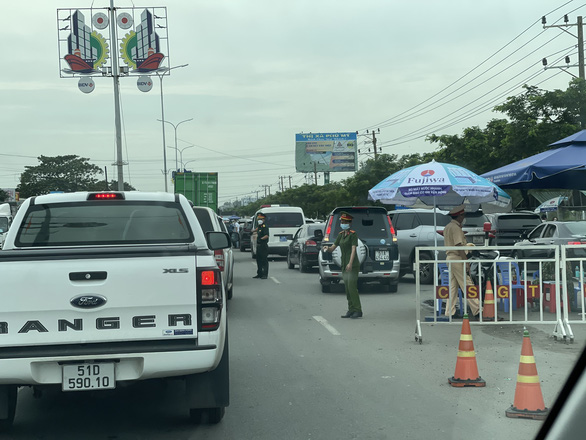 Residents of Ho Chi Minh City started searching for the new COVID-19 prevention and control regulations in Ba Ria - Vung Tau on Friday evening, when the provincial authorities announced the relaxation of curbs on socio-economic activities and medical controls.

Accordingly, arrivals to the province are no longer required to present a negative COVID-19 testing certificate while beach-going and outdoor sporting activities such as walking, golf and tennis are resumed with a limited number of participants starting Saturday.

Many people thus drove their vehicles from Ho Chi Minh City to Vung Tau, the popular beach city of the southern province, on Saturday morning.

As a result, the traffic volume recorded at three tollbooths on National Highway 51, a major route from the southern metropolis to Vung Tau, increased by an average of 27 to 33 percent on Saturday morning compared to the previous days.

As arrivals to Ba Ria - Vung Tau must leave their vehicles to perform health declaration as per the new regulations, congestion happened for several kilometers at medical stations along National Highway 51.

Local functional forces have requested arrivals to install mandatory applications on their smartphones and perform health declaration online before entering the province to avoid large gatherings.

Ba Ria - Vung Tau, whose population is nearly 1.15 million, had administered some 849,000 first shots and more than 119,000 second jabs to its residents aged 18 and older by Friday, according to the national COVID-19 vaccination portal.

Since the fourth virus wave hit Vietnam on April 27, the province has documented 4,376 COVID-19 cases, including 50 deaths, the ministry’s data shows.

Nationwide, 852,986 community infections have so far been recorded in 62 out of the country’s 63 cities and provinces, except Cao Bang.

Vietnam has registered 857,639 patients, including 788,923 recoveries and 21,043 deaths, since the pandemic first struck it early last year.