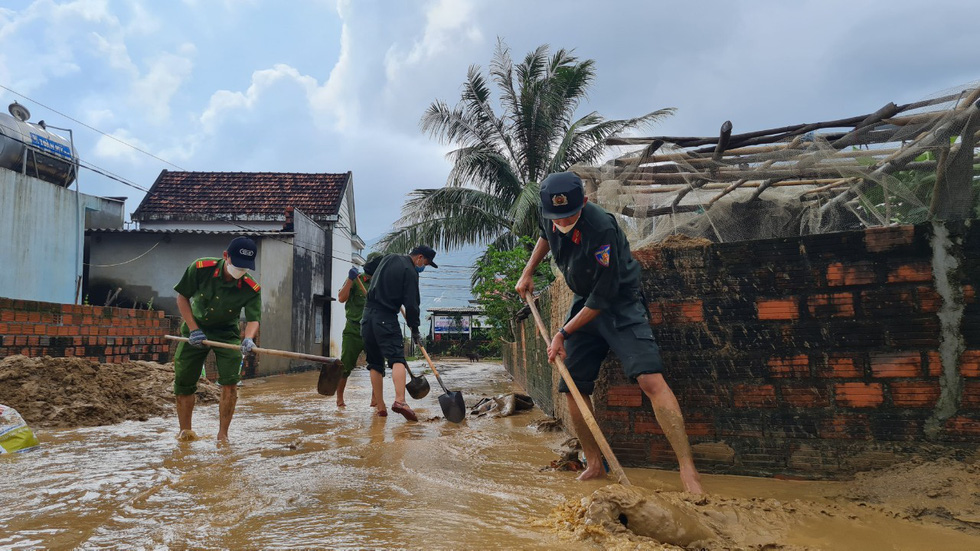 Hundreds of policemen, army soldiers, and motor vehicles helped people living near Cam Mountain in the south-central Vietnamese province of Binh Dinh with a cleanup on Friday after two back-to-back landslides had heavily destroyed the venue.

The cleanup that has taken place for days gained the support from more than 170 policemen, soldiers, and youth volunteers as soon as the morning sunlight shone down on Chanh Thien Village at the foot of Cam Mountain in Cat Thanh Commune of Binh Dinh’s Phu Cat District on Friday.

At that time, more than 100 houses in Chanh Thien Village were covered with mud while rock and soil piled up on some local roads.

A downpour on Thursday night had caused mud from Cam Mountain to slide down on the village and flow into people’s houses.

Another landslide had also hit Chanh Thien on the evening of November 14, following torrential rains.

An estimated 25,000 metric tons of soil and rock slid from the top of the mountain into the residential area below, according to Mai Van Be, deputy chairman of Cat Thanh Commune.

Functional forces mobilized three excavators and seven specialized vehicles to remove and transport soil and sand away from the scene on Friday.

They also created a channel to the west of the village so that water from the mountain can flow to a natural stream there and avoid flooding people’s houses.

As of Friday afternoon, the main road, which stretches from the entrance to the end of Chanh Thien Village, had been cleared of mud, allowing people and vehicles to travel more conveniently.

“After four days of running back and forth, raking mud, and shoveling dirt by ourselves, every villager has been exhausted,” said Dinh Dieu, a 63-year-old local resident.

“This morning, everyone in the village was happy seeing the soldiers arrive to give us a hand.

“Currently, the villagers and soldiers are together scooping soil up, bagging them up, and piling the bags around the mountain foot to prevent mud from pouring into local houses.”

The lieutenant colonel has thus suggested local authorities evacuate its residents to safety as soon as possible.