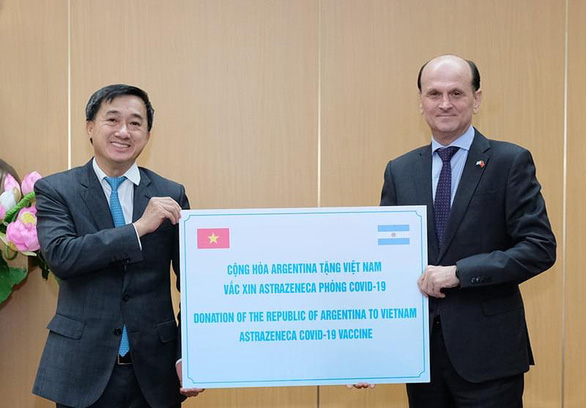 Vietnam’s Ministry of Health has received 500,000 doses of AstraZeneca vaccine offered by the Argentine government for the Southeast Asian country’s fight against COVID-19.

Argentine Ambassador to Vietnam Luis Pablo Maria Beltramino handed over the donation, worth over US$2 million, to Vietnamese Deputy Minister of Health Tran Van Thuan at a ceremony held in Hanoi on Thursday.

Thuan expressed his gratitude to the government and people of Argentina, as well as the Argentine Ministry of Health and the Argentine Embassy in Vietnam, for the vaccine aid.

“We will use these vaccine doses in the most effective way to improve our people’s immunity, contributing to preventing and driving back the epidemic,” the official said.

This is the first time that the Argentine government has donated COVID-19 vaccines to a foreign country, Ambassador Beltramino said.

His country will always remember that Vietnam gave Argentina 20,000 face masks for the prevention of COVID-19 last year, the diplomat added.

The two countries need to continue to cooperate in the pandemic fight through specific actions, including those in the pharmaceutical field, the ambassador said.

Argentina will accompany Vietnam in this battle, he emphasized.

The cooperation between Vietnam and Argentina has been developing well since they established diplomatic relations in 1973, Deputy Minister Thuan said.

In October, both sides virtually conducted the seventh meeting of the Argentina-Vietnam Intergovernmental Committee on Economic, Trade, and Science and Technology Cooperation.

At the event, they agreed to strengthen cooperation in food safety and the use of Argentine pharmaceuticals in Vietnam.

They also reached agreement on boosting collaboration to improve medical service quality, health infrastructure, and the combat against COVID-19.

Besides Argentina, Vietnam has received vaccine donations from other countries, including the U.S., Japan, Australia, the UK, France, Italy, Russia, the Czech Republic, and China, among others.

The Southeast Asian nation has received more than 147.5 million COVID-19 vaccine doses out of the 200 million shots that have been purchased, the health ministry reported.

The government has provided inoculation for children aged 12 to 17 since early November.