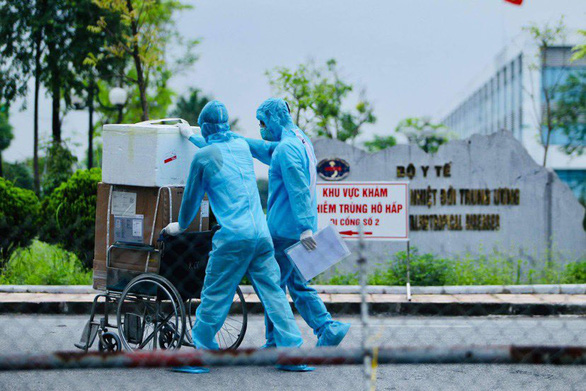 Hanoi has documented more than 10,500 COVID-19 cases over the past seven days, with the Vietnamese capital’s daily count hitting an all-time high on Tuesday.

The city logged 10,503 positive COVID-19 cases from December 16 to 22, according to the municipal Department of Health.

A total of 1,704 cases were recorded on Tuesday, the highest daily count in the capital city since the beginning of the pandemic in early 2020.

On Wednesday, the health department announced 1,646 new cases in 29 out of 30 districts, 483 of which were detected in the community while the rest were identified in quarantine facilities and isolated areas.

The districts that registered the most cases include Hoang Mai, Ha Dong, Long Bien, Ba Dinh, and Dong Anh.

Hanoi has detected 32,044 cases since the fourth virus wave hit Vietnam on April 27.

Among these cases, 11,639 were found in the community and 20,405 were reported in quarantine facilities and isolated areas.

The Hanoi-based National Hospital for Tropical Diseases confirmed on Wednesday that it was providing treatment for 460 patients, 50 of whom required breathing support and five needed extracorporeal membrane oxygenation (ECMO), or outside-the-body life support.

Among the seriously-ill patients at the hospital, ten are pregnant or postpartum and all are not vaccinated.

Such cases typically worsen after one or two days and require intensive care, according to a doctor at the hospital.

As of Wednesday, Hanoi, with a population of eight million, had administered over 6.8 million first doses and some six million second jabs, according to the national COVID-19 vaccination portal.