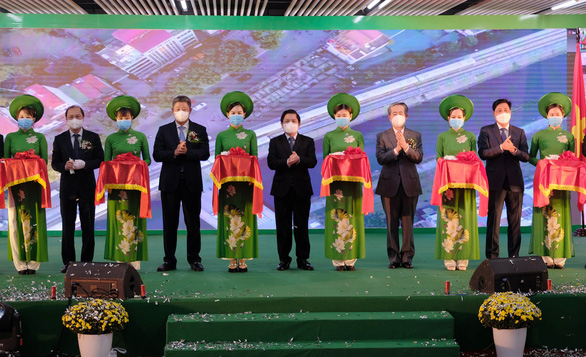 Hanoi’s Cat Linh - Ha Dong elevated railway line, the first of its kind in Vietnam, was formally inaugurated on Thursday after a decade of construction with most of the cost covered by official development assistance (ODA) loans from China.

The inauguration of the railway line, part of a metro system in Hanoi, was organized by the Ministry of Transport in conjunction with Hanoi authorities and the Chinese Embassy in Vietnam on Thursday morning, after its over-two-month commercial operation since November 6, 2021.

The urban railway route, which runs from Cat Linh Station in Dong Da District to Yen Nghia Station in Ha Dong District, reached a milestone of one million passengers on Thursday, according to its operator Hanoi Railway Company Limited.

As the first of eight urban railway projects approved by competent agencies for Hanoi, the Cat Linh - Ha Dong train line has contributed to improving the traffic situation in the capital's western area, according to local authorities.

This urban railway route carries nearly 15,000 passengers on average per day, with the number of passengers using monthly tickets having increased from 10 percent initially to 20 percent now.

However, passenger numbers have recently declined due to increased COVID-19 infections in the capital city.

Speaking at the inauguration ceremony, Chinese Ambassador to Vietnam Xiong Bo congratulated the official inauguration of the elevated railway and thanked contractors and agencies of both countries for their roles in the project’s completion.

The Cat Linh - Ha Dong train route was built by China Railway Sixth Group Co. Ltd. for 10 years from October 2011 at a cost of more than US$868 million, of which 77 percent came from Chinese ODA loans and the rest from the Vietnamese government’s corresponding capital.

Before the line was put into official operation, 63 emergency rescue circumstances had been tested successfully, the project’s operator said.

The line has 13 trains, with four carriages per train, which can run at 35-80 kilometers per hour.

A full trip will take 23 minutes on the 13-kilometer elevated railway line which has 12 stations.

The service, the first-ever in Vietnam, helps encourage the use of public transport among residents in the capital and thereby ease traffic congestion, local authorities said.

The city of 8.3 million people often suffers from traffic gridlock at rush hour because of a large number of personal motorbikes and cars.