Many beaches in Ha Tinh Province, north-central Vietnam are still filled with trash and shows no signs of post-pandemic recovery even though the summer tourist season is around the corner.

Tuoi Tre (Youth) newspaper reporters arrived at Xuan Hai Beach in Loc Ha Town on Saturday and noticed that the location was covered in rubbish, while nearby seafood restaurants had been degraded.

After being affected by the COVID-19 pandemic for two years, most of these restaurants have had to shut down due to ailing business.

A similar situation was recorded at Thien Cam Beach in Cam Xuyen District, about 30 kilometers away from Xuan Hai Beach.

The beach was riddled with trash, most of which had been washed up ashore.

Some garbage was also left behind by local fishermen.

At the Thien Cam tourist area, a project worth hundreds of billions of dong (VND100 billion = US$4.3 million) has been halted, while it remains unclear when the construction will resume.

Nearby shops, eateries, and hotels were also degraded and have yet to be renovated.

The prolonged COVID-19 pandemic has greatly affected tourism activities in the locality, said Hoang Xuan Huong, head of the management board of the Thien Cam tourist area.

Some of the garbage has been washed up ashore, while some was discarded by local residents, Huong continued.

The management board will coordinate with competent authorities to clean up and renovate the beach to get ready for the upcoming summer tourist season, he added. 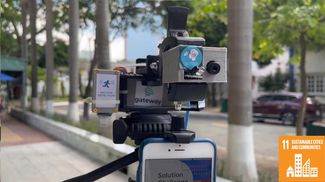 Every solution was graded on a 100-point scale and on two criteria, including impact (60 percent) and technology (40 percent).