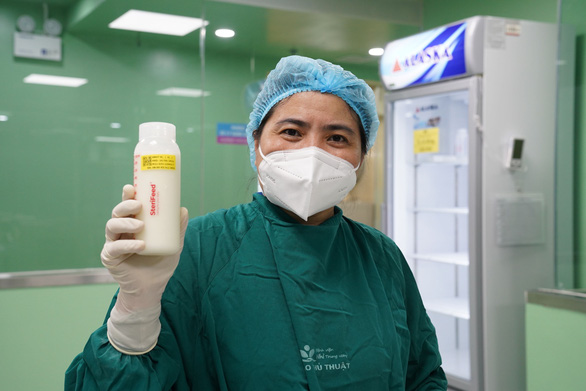 After four months of preparation, the first human milk bank in Hanoi was officially launched on Tuesday at Vietnam National Children's Hospital.

The human milk bank receives financial support from the government of Ireland and organizations that protect the healthy growth of mothers and children such as Alive & Thrive and Newborns Vietnam.

It can also help save around 15 days of hospitalization and 10 days of feeding parenteral nutrition compared to formula products on average.

Doctor Le Thi Ha, head of the neonatology department at the Vietnam National Children's Hospital, said that each year the hospital provides treatment for nearly 5,000 babies with serious illnesses such as premature birth, low birthweight, or birth defects.

Following the a four-month trial operation, the breast milk bank has received 600 liters of milk from 38 mothers whose children are being treated at the hospital.

After being pasteurized, the milk was given to 280 children, of which 62 were infected with COVID-19.

During the process of milk pasteurization, the hospital follows technical guidance and strict procedures in accordance with the Ministry of Health, said Dinh Anh Tuan, deputy director of the maternal health and children ward.

“Donated breast milk will be tested and sterilized to ensure safety for babies while milk-donating moms have to undergo a health check and periodic blood tests,” Tuan added.

The bank is the seventh to officially operate in Vietnam.

Seán Farrell, development specialist at the Ireland Embassy in Vietnam, expressed his pride in helping Vietnam expand the breast milk network, which gives access to lifesaving human milk and an equal chance of a healthy and successful life to children.

He also spoke highly of the milk donors and staff working at the bank over their silent yet enormous dedication.