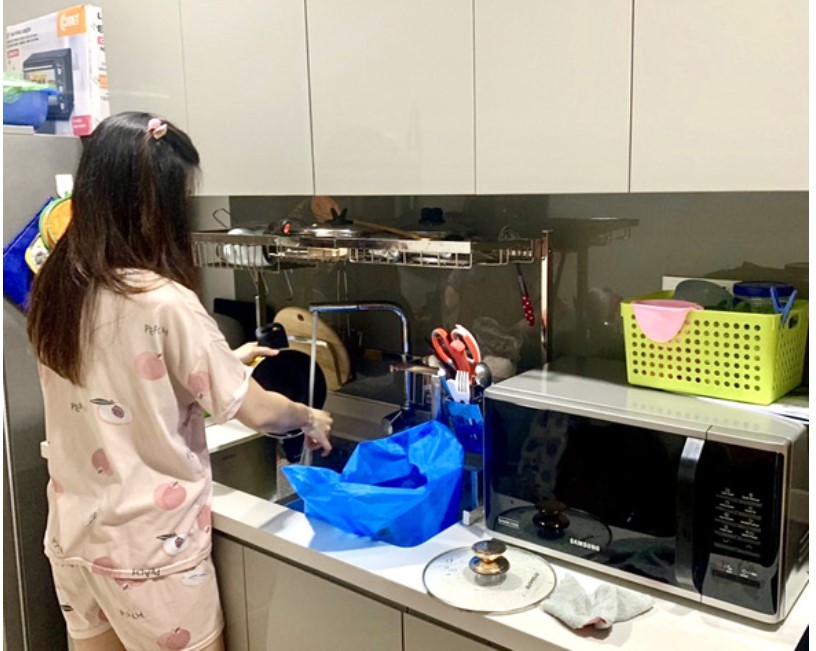 While there are many young workers in cities who are working hard to own a house, there are also some people who have decided to give up this dream for certain reasons.

Giving up a mental burden

Huynh Anh Tuan, a city dweller of Phu Huu District in Thu Duc City, Ho Chi Minh City, who suffered from a sharp drop in income during the COVID -19 pandemic, decided not to pursue his dream of owning a home.

When he gave up on the plan, he felt relaxed after the great pressure was gone.

Tuan set a goal many years ago to own his own home before he turned 30.

To that end, Tuan took on many freelance jobs after graduating from college and invested a small amount in stocks.

In addition, an acquaintance promised to lend him VND500 million ($21,650) if he bought a house, which fueled his strategy over time, at least before the pandemic.

Although he had such an ambitious plan, now, at the age of 28, Huynh Anh Tuan is changing his mind because of COVID -19.

As a freelancer, Tuan has neither a fixed salary nor social security. Due to the pandemic, he had to use his savings for rent and other living expenses.

To save more money, he decided to move to a cheaper apartment, get rid of some unnecessary things, and give up the dream of buying a house one day.

"I am not thinking about an apartment or an affordable house now," Anh Tuan said.

"Even though it is said to be "affordable", it is still out of reach for low-income people like me and other freelancers," he added.

Since shedding the burden, Tuan no longer works too hard.

"I bought some equipment to support my work and signed up for my desired courses. I also took my parents to some tourist attractions that we did not dare go to before because of the high cost.

"Now, I am focusing on saving up to get married," the young man laughed, adding that he plans to leave the city in a few years and return to his hometown.

Minh Duc, 30, an urban resident who lives in Phu Nhuan District in Ho Chi Minh City, is in the same situation as Tuan, but he told Tuoi Tre (Youth) newspaper about his comfort and relaxation after getting rid of the pressure of having to buy a house in the city.

"I used to think I had to earn as much money to have an apartment as others," Duc said.

"But after the COVID-19 pandemic, which has damaged and weakened me too much, I have come to the decision to work normally to maintain the welfare of myself and my family," he added.

I do not want to pay debts for life

Duc believed that no one should sacrifice everything just to have an apartment in the city.

The IT employee said that it is better to have a place that is suitable for his life and work, and not necessarily a house.

Based on this, he has used the savings he earmarked to buy a home in the city to improve the family house in his hometown.

He also puts excess money in the bank in case he gets sick or something unexpected happens to him.

"Instead of taking on more and more shifts or working part-time on weekends, I can visit my parents and younger brother more often and spend more time with them," Duc said.

"I do not want to spend most of my youth working to pay off housing debt that can last up to 20 years if I buy in installments. Not to mention that in some cases, the debt can put a lot of strain on a marriage.

"Houses in the city are only for high-income people. Housing prices are rising too much for white-collar workers with average incomes like me," he added.

According to the latest analysis by the Ho Chi Minh City Real Estate Association (HoREA), not a single apartment was sold for less than VND25 million (US$1,092) per square meter in Ho Chi Minh City in 2021.

HoREA cited data from 2016-21 showing that the rate of affordable housing has decreased over time.

Invest instead of buying homes

While there are still many people who want to buy a home, many young workers choose not to, even though they can afford monthly payments.

These people use their savings for investments, starting businesses, or buying a car.

In the middle of this year, Nguyen Thi Bich Nhi will pay off the equivalent to 60 percent of the value of her dream car of VND900 million ($38,975).

As a bank employee who runs an online cosmetics business, Nhi said she never intended to buy a house in the city.

"I like to change the environment where I live and work sometimes. When I change my job, I can change my residence to get to work more conveniently.

"In my opinion, it is important to have a comfortable living environment in order to work effectively," the young woman explained.

Thanks to this thought, Nhi decided to buy a car instead of buying an apartment, although her dad promised to lend her money to buy a house.

"I do not want to buy a house because it might be quite difficult for me to sell it if I want to change," Nhi added.

She is also concerned about the many uncertain things that could happen during the installment period.

"That's why buying a car is my priority. My monthly installments are absolutely cheaper than buying an apartment, which costs about VND2-3 billion ($86,610 - 130,000) even for the cheapest apartment," Nhi explained her decision.

With her choice, Nhi can live a comfortable life in a modern rental apartment. She can use her income for rent, installment payments for buying a car, and personal expenses.

Ngoc Thanh, a 36-year-old woman living on the outskirts of Nha Be District in Ho Chi Minh City, has also chosen to rent a house and use part of her income for investment.

"I rent a house and use the money I have left after monthly expenses to deposit in the bank or invest profitably in some areas. The income from this becomes my monthly income, which I can use to pay my rent," Thanh said.

Thanh thinks differently from many other Vietnamese and does not believe she needs to try to leave a house to her children in the future.

"It is better to leave knowledge to children than to leave a house.

"Besides, the wealth we leave to our children is not necessarily a house, but a saving account or other beneficial investments to help them get started," said the mother of two.