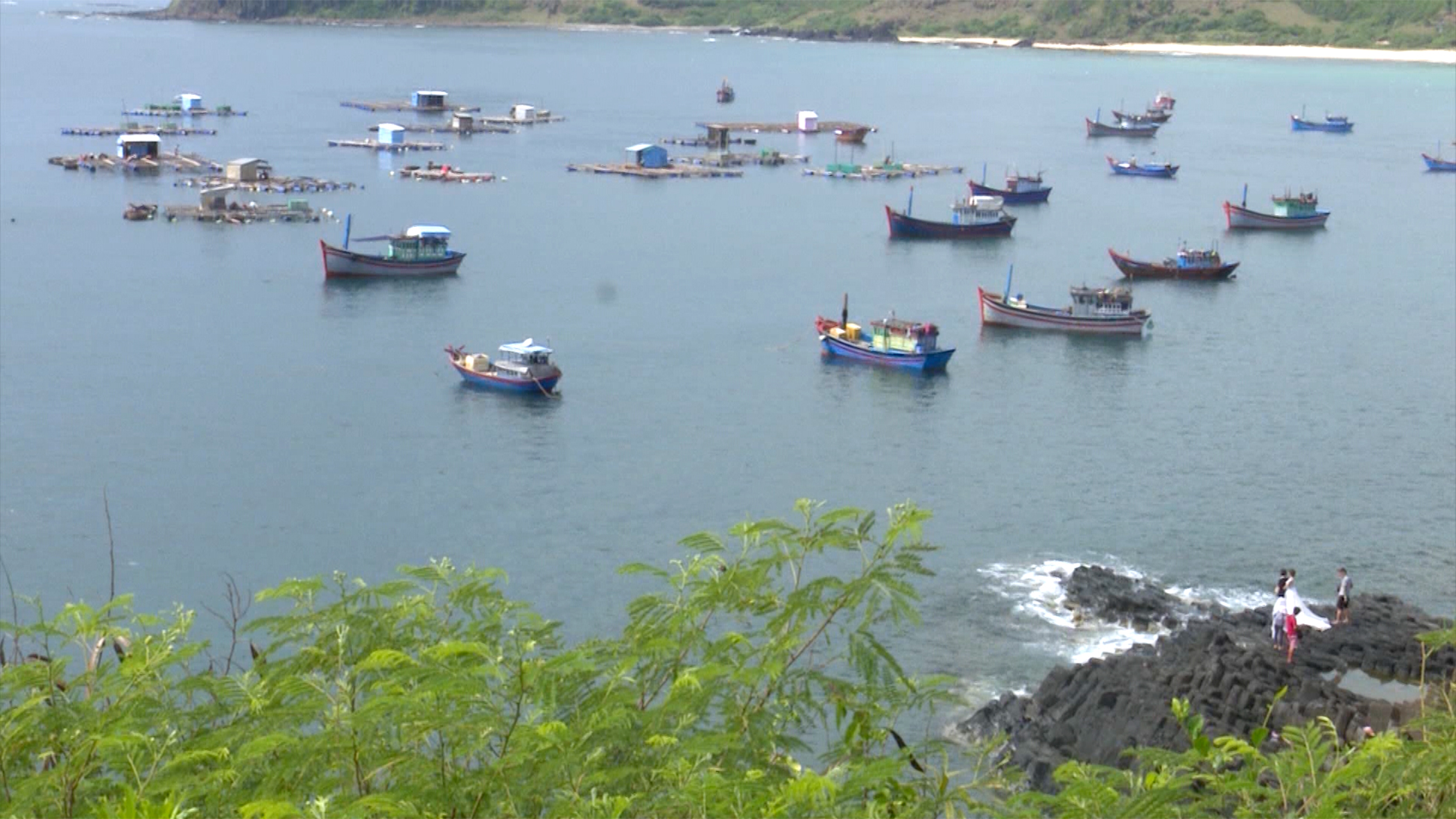 The unplanned development of lobster farming rafts in the waters near Ganh Da Dia, also known as the Reef of Plates, is threatening the landscape and environment of the special national relic site in the south-central Vietnamese province of Phu Yen.

Ganh Da Dia, located along the coast in Phu Yen’s Tuy An District, was created from volcanic eruptions millions of years ago and includes interlocking basalt rock columns.

The rocks have flat surfaces of different shapes and stacked over each other.

They look like a gigantic beehive or a pile of dinner plates.

Every day during this summer traveling season, Ganh Da Dia welcomes thousands of tourists, some of whom have voiced their concern about the adverse impact of lobster farming rafts illegally established near the unique site.

“These lobster rafts have damaged the landscape of the relic site, imposing a risk of environmental pollution from food residues, shrimp waste, and household waste from farmers,” said Pham Ngoc Hai, a tourist from Ho Chi Minh City.

“I think the clearance of these rafts as well as a complete ban on seafood farming in this area are an urgent matter for the authorities.”

Following the comments of tourists like Hai, Huynh Van Khoa, chairman of Tuy An District, said on Saturday that local authorities had sent an inspection team to the site to work on the issue.

The team then reported that 20 lobster farming rafts unlawfully developed by households, each with an area of 150 square meters, were in operation in the waters of Ganh Da Dia.

“This area is only for tourism development, with no aquaculture planning,” Khoa said.

“It is illegal for local people to set up lobster rafts without permission.”

The district chairman added that he ordered the commune-level administration to require the raft owners to move out of Ganh Da Dia’s water area, with coercion allowed if needed.

Khoa, who assumed the chairman position last year, said he found out that lobster farming in the waters near Ganh Da Dia has been rampant for five years, with the owners setting up their rafts to raise lobsters there every summer and moving away during the rough sea season.

“We also heard that some of these rafts belong to relatives of a few commune-level officials, so the district authorities will check it carefully to strictly handle any violators,” Khoa added.

Meanwhile, Nguyen Kim Thanh, chairman of An Ninh Dong Commune, where Ganh Da Dia is located, said that the lobster rafts were originally established by local people in other areas before being moved to the waters near the site about two months ago for convenient management.

Thanh blamed the overnight emergence of the lobster farming rafts and busy working schedules for delays in dealing with the issue.

Besides Phu Yen, there are only a few other places featuring rock types like Ganh Da Dia, including the Giant’s Causeway in Northern Ireland of the UK, Los Órganos in Spain, and Fingal in Scotland.

Currently, the south-central Vietnamese province has a plan to spend VND40 billion (US$1.7 million) on a project to restore and embellish Ganh Da Dia between now and 2024.