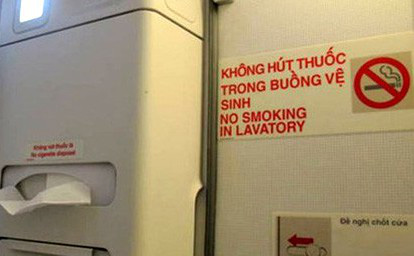 A man from Hai Duong Province, northern Vietnam was given a nine-month flight ban after he failed to pay a fine for smoking on a plane in late June.

He smoked a cigarette on the airplane even though the flight attendant informed that smoking was not allowed on the flight.

After the plane landed, the flight crew handed Thanh over to the airport security unit, which later transferred the case to the Northern Airports Authority.

On June 30, the Northern Airports Authority imposed a fine upon the passenger for his violation.

Despite reminders from relevant authorities, Thanh did not comply with the decision and failed to pay the fine before the due date.

The CAAV thus decided to impose the nine-month flight ban on Thanh and asked domestic and foreign airlines not to provide their services to the man during the ban.

Airports are responsible for directing their units and departments to closely check documents and IDs of passengers.

Government Decree No. 162 promulgates that smoking cigarettes and electronic cigarettes on a plan is punishable by a fine worth VND3-5 million (US$128-213).

Before departure, flight attendants always remind passengers not to smoke on board.

Cases of smoking on a plane are booked by the flight crew and transferred to the airport authority for further handling.

If violators fail to pay the fine, they will be temporarily banned from flying in accordance with regulations.

Last month, a 72-year-old man from northern Ha Nam Province was handed a nine-month flight ban for failure to pay a similar fine.