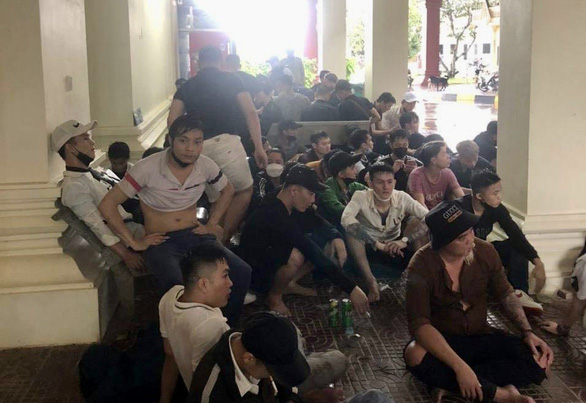 Authorities in both Cambodia and Vietnam are verifying a case in which a large number of Vietnamese workers fled a Cambodian casino and ran toward the Vietnamese border on Saturday.

As shown in a video clip and in the comments of a social media post on Saturday afternoon, more than 60 Vietnamese people dash toward the Moc Bai border gate in Tay Ninh Province, southern Vietnam after escaping a casino in Cambodia.

The fleeing happened amid a downpour and some people fell and were recaptured by those wearing security uniforms.

A witness recounted that a group of as many as 70 workers, all Vietnamese, were running away from the Cambodian casino, located near Moc Bai, around 3:00 pm that day.

“We came here from Vietnam for work and were asked by our employers to set up social media accounts and then lure people to pay for online games and gambling offered by the casino,” the witness said.

This person cited news reports as saying on Saturday that the casino owners, who spoke Chinese, had run away bringing along their money, appropriating several months’ wages of workers.

“We therefore called for each other to flee the casino to return to Vietnam,” the witness narrated.

At 5:00 pm on Saturday, H.D., one of the runaways, told Tuoi Tre (Youth) newspaper that he was in a border area in Cambodia where the escapees had flocked to in order to return to Vietnam.

The exact number of the runaways and the cause of the incident have yet to be determined so far, according to Tuoi Tre sources, which added that agencies concerned of both countries have been verifying the case.

Chairman of the Tay Ninh administration Nguyen Thanh Ngoc confirmed to Tuoi Tre on Saturday afternoon that 56 Vietnamese workers had fled from a casino in Cambodia’s Svay Rieng Province and rushed to Tay Ninh.

“According to initial reports, the fleeing resulted from a conflict between these workers and their employers. Tay Ninh and Cambodian authorities are following procedures to repatriate these Vietnamese workers,” Ngoc said.

Earlier on August 18, a group of 42 Vietnamese workers fled the Rich World Casino in Cambodia’s Kandal Province and tried to swim across the border via Binh Di River in Vietnam’s An Giang Province to return to their homeland due to overwork and unpaid jobs.

Among the escapees, 40 reached Vietnam, one died during the river crossing, and the remainder was recaptured by the casino guards. But he was later rescued and repatriated.

Vietnam’s Ministry of Foreign Affairs on September 1 said a total of 89 Vietnamese nationals had been rescued and repatriated from Cambodia after being tricked into taking ‘high-paying easy jobs’ by human trafficking rings.

By joining hands with Cambodian authorities, the agency has so far this year repatriated more than 600 citizens who were duped by human traffickers into working in Cambodia in miserable conditions, the ministry reported.