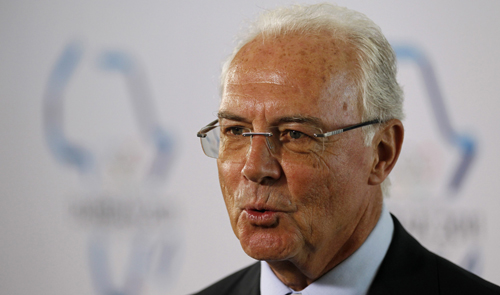 A 90-day provisional ban by FIFA on German World Cup-winning soccer player and coach Franz Beckenbauer has been lifted after only 15 days, his manager said on Friday.

Germany's Beckenbauer, one of the world's best known former players, had been banned on June 13 after refusing to cooperate with an investigation by world soccer's governing body into the award of the 2022 World Cup to Qatar.

The 68-year-old is a former member of the FIFA executive committee which controversially awarded the World Cup to Qatar in 2010, and had received "repeated requests" to provide information, FIFA had said in a statement at the time.

He has since made a complete U-turn and offered to provide responses to the questions which he had initially rejected because they were written in "legalese English."

"Today on June 27, Franz Beckenbauer was informed by FIFA that the provisional ban.... was lifted with immediate effect," manager Markus Hoefl said in a statement.

He said Beckenbauer's management still considered the provisional ban as unjust but said under the circumstances it would have been better had he answered the questions posed to him by the commission earlier.

"I underestimated the situation mainly because such issues were usually dealt with by my management," Beckenbauer said in the same statement.

The ban issued at the start of the World Cup in Brazil meant he could not attend any games in an official capacity and the decision was a major embarrassment for the former player and FIFA official.

It also raised questions regarding his involvement in the vote to give the tournament to Qatar. Beckenbauer will, however, not travel to Brazil despite the ban being lifted, he said.

As a player, Beckenbauer redefined the role of libero or sweeper and captained the West Germany side which won the 1974 World Cup.

He led West Germany to World Cup victory as a coach in 1990 and was head of the local organizing committee when Germany hosted the showpiece in 2006.