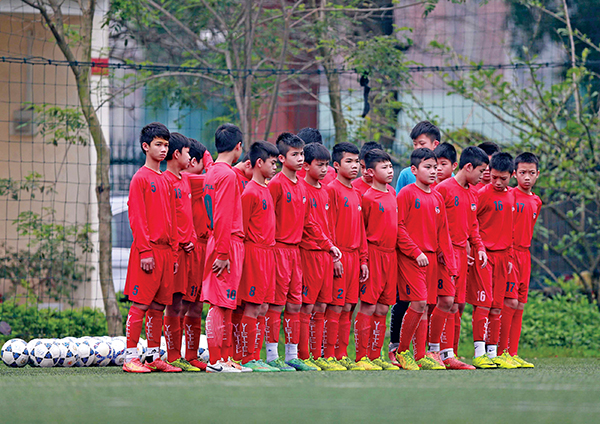 Military-run football center an incubator of young talents in Vietnam

The football (soccer) center operated by Viettel, a military-run Vietnamese mobile network operator, is where budding, teenage Vietnamese talents are trained to realize their dreams of becoming star players.

The Viettel Football Training Center, currently located at 155 Truong Chinh Street, Thanh Xuan District in Hanoi, is quite isolated from residential areas and the heart of the city.

Nearly 150 teenagers aged from under 12 to under 21 from all over the country have beaten several hundred contenders and proved they have what it takes to be promising footballers.

As Tuoi Tre (Youth) newspaper reporters observed on a weekend in March, the youngsters quickly got up to a siren at 5:00 am sharp.

They briskly cleared their bedding, performed hygienic routines, and showed up at the practice courts 15 minutes later.

A young trainee is pictured neatly folding up his bedding after getting up at 5:00 am in the morning. Photo: Tuoi Tre

They then took a shower at 6:00 am before having breakfast and going to academic classes.

Their afternoon training session lasted from 2:15 pm to 5:00 pm.

The youngsters learned with their tutors for two hours starting from 7:00 pm before having dinner at 9:00 pm and going to bed one hour later.

Vu Quang Do, of the U-15 team, has practiced at the center for over three years now.

Though his hometown in Thai Binh Province is some 110 kilometers from Hanoi, he is allowed to return home only twice a year, during Tet (Lunar New Year) and the summer break.

The boy, who looks up to outstanding local footballers including Van Quyet and Tuan Anh, said he is used to taxing training and always gives it his best shot to emulate his idols.

Coaches take turns to take care of their students in the evening, and remind them to strictly keep to the exacting schedule.

Each of them beat hundreds of fellow contestants to make their way to the center’s teams.

Nguyen Tien Loi, of the U-15 team, divulged he defeated some 500 contenders in the central province of Ha Tinh, his hometown, and a similar number of competitors in Hanoi to land a spot on the center’s 25-strong U-12 team three years ago.

One of the Viettel Football Training Center’s philosophies is making sure that their students are capable of passing university entrance exams and having good conduct, according to coach Dang Phuong Nam, head of the center’s training department and a former Vietnam international.

Those who fail to achieve satisfactory academic performance or repeatedly misbehave over one year will be eliminated the following year.

“We always make academic performance and good conduct a top priority among our four criteria in selecting trainees. Our students are all required to pass high school graduation and university entrance exams and have a wholesome, respected lifestyle,” Nam noted.

These are meant to make sure the trainees keep furthering their professional and academic efforts, protecting their good image in local fans’ eyes and resisting rampant temptations of match-fixing later, he added.

Several of the center’s students boast brilliant academic achievements. Some are even advised by the coaches to give up on their football training and focus on their academic pursuits in order not to waste their scholastic capacity.

Some of them are currently studying at local universities.

A trainee is shown tending to his teammate's injury. Photo: Tuoi Tre

The center has 17 coaches, most of whom are former members of the popular erstwhile The Cong Club of the military, such as Nguyen Hong Son, Dang Phuong Nam, Dang Thanh Phuong, Nguyen Hai Bien, and Dinh The Nam.

In 2009, the Ministry of National Defense decided to disband The Cong Club and handed over its league squad to Hanoi while entrusting Viettel with training its young trainees.

Nguyen Tan Anh, manager of the Hoang Anh Gia Lai-Arsenal JMG Football Academy team, observed that the Viettel Football Training Center is currently one of the country’s most prestigious football training facilities since it tapped into the former The Cong Club’s strengths and traditions, and adopting rigorous training in a military-like environs.

He is positive that the signing of a comprehensive cooperation agreement between the Viettel Football Training Center and HAGL Group, which owns league club Hoang Anh Gia Lai and the Hoang Anh Gia Lai-Arsenal JMG Football Academy team, in the coming time will hugely benefit the Vietnamese football arena.

Hoang Cong Vinh, vice CEO of Viettel Group, told Tuoi Tre that the group’s football teams aim to get back to the professional football arena in three years’ time.

Members of the Viettel Football Training Center's U-15 team are pictured during a drill. Photo: Tuoi Tre

Viettel is also working on a plan to forge an alliance with Borussia Dortmund, one of Europe’s leading football clubs, and establish a football training academy, which is expected to be as successful as the Hoang Anh Gia Lai-Arsenal JMG Football Academy, located in the Central Highlands province of Gia Lai.

The project, which started two years ago but was later suspended, was recently resumed.

The Viettel Football Training Center is set to be moved to a new facility on a 12-hectare plot in Hoa Lac, some 30 kilometers from the heart of Hanoi, in June this year.

The facility houses a six-floor building for athletes and trainees to stay in, and an indoor drill building with hi-end equipment and comforts.