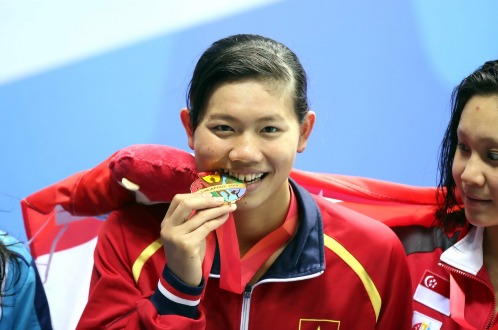 Nguyen Thi Anh Vien is a 19-year-old Vietnamese woman who is the fastest swimmer in Southeast Asia in numerours races.

>> An audio version of the story is available here The young woman from the Mekong Delta city of Can Tho won eight gold medals and broke eight records at the 28th Southeast Asian (SEA) Games in Singapore, which wrapped up on June 16. She has been elected as one of the five best athletes at the tournament by The New Paper of Singapore, together with Singaporean swimmer Joseph Schooling, Thai table tennis player Suthasini Sawettabut, Thai footballer Chanathip Songkrasin, and finally the Filipino rugby team. Here are eight things about star swimmer Vien you may not know: 1. Anh Vien is not only a professional athlete but also a professional official of the Vietnam People’s Army, wearing the chevron of a captain. At the age of 19, she is the youngest captain in the army’s history. Thanks to her outstanding results at swimming tournaments, Vien was promoted to the grade of senior lieutenant at the age of 17. The following year, she became a captain. Vien was officially admitted into an army sports training center in Can Tho when she was 14. 2. Anh Vien is now the only ‘billionaire’ (in Vietnamese dong) in the swimming circle in Vietnam, earning prizes worth on average VND500 million (US$23,100) a year since 2013. It is estimated that she pocketed a total prize of VND1 billion ($46,200) this year thanks to her achievements at the 28th SEA Games.

3. She gives most of her income to her parents, who live in her hometown, Can Tho. Her parents admitted that they now have a well-built house and state-of-the-art furniture and other facilities thanks to the money she has sent home. Once, she was awarded a prize of an expensive motorbike, which she later gave to her parents. 4. Despite earning lavish income, Vien has led a simple life without much material demand. She does not have a mobile phone, and on overseas training trips, she uses that of her coach, Dang Anh Tuan, who always accompanies her. She is not proficient in using the Internet and does not have a Facebook account, or any other social network account. In fact, Vien owns almost nothing except for her training gear, and she spends little. All the costs of her daily living, food and training are covered by the Vietnamese government. 5. Vien revealed that she does not have the freedom for a normal life because of training, but she is happy with that. “I want to be the number one and I don’t feel relaxed to stand on the podium to receive medals as the second or third winner,” Vien confirmed. 6. Vien is not proficient in riding a bicycle and does not know how to ride a motorbike. 7. Since she has spent most of her time in recent years training abroad and domestically, Vien cannot follow a normal school schedule like other students. She is now enrolled in a special class of two, including a teacher and a student, to prepare for lessons in chemistry, math, physics, literature, history, geography, and English for her exams to finish 11th grade. 8. Vien has never had a boyfriend. She said that she has some friends at swimming clubs in the U.S., where she trained to prepare for the 2015 SEA Games, but has not stayed close with any of them. Vien added that time spent training covers most of her life. “Now, a working day of mine includes training, eating, sleeping, and training again,” she once told journalists. It is said that life is like a bargain, meaning people have to limit their time on entertainment and other normal activities to spend more on studies to get a Nobel Prize, for example. But on the other side, life is like a business puzzle, and the best businessman is the one who is able to minimize input – including money, time, labor or workforce – and to maximize his output, or simply profit. What are your thoughts about Vien? Do you think that she minimized her ‘input’, including time and labor, and maximized her achievements?