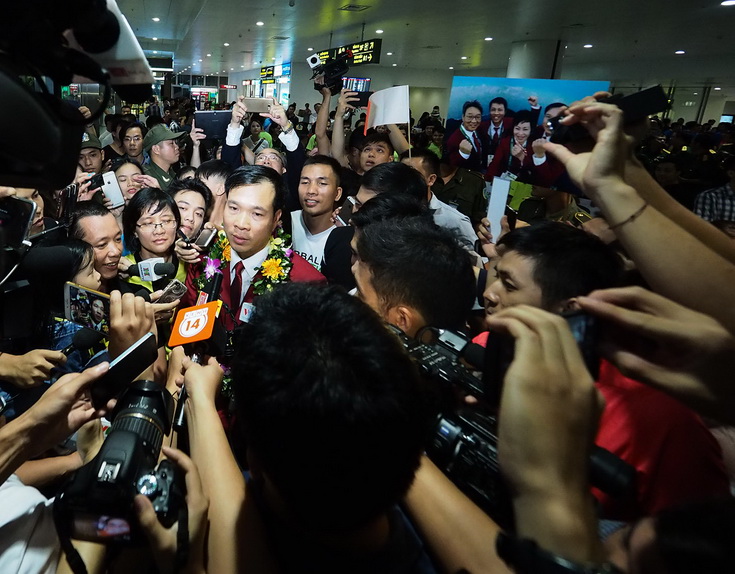 Hoang Xuan Vinh, Vietnam’s ace shooter and first-ever Olympic gold medalist, was welcomed by hundreds of fans as he returned to Vietnam from the 2016 Olympics on Sunday night.

Terminal T2 of Noi Bai International Airport in Hanoi was packed with well-wishers, including Vinh’s family, friends, fans and local journalists, for nearly 45 minutes after his arrival at 9:00 pm.

The 42-year-old military colonel quenched his country’s thirst for its first ever gold in 64 years of Olympic competition by acing the men’s 10m air pistol event during the opening day ofthe Games in Rio de Janeiro, Brazil, on August 7.

He later won a silver medal on August 10 after finishing second in the men’s 50m pistol category.

Speaking to the press, Vinh said he was still surprised by his own achievements in Rio, adding that he was more “shocked” to be greeted by such a large crowd of fans.

“Winning a gold and a silver at the Olympics was beyond my expectation. I still have a long journey ahead with many international tournaments to conquer,” the Vietnamese sharp shooter said.

Speaking to Tuoi Tre (Youth) newspaper at the airdrome, Nguyen Ngoc Thien, Minister of Culture, Sports and Tourism, considered Vinh’s accomplishment the result of much preparation over many years and generations.

Thanks to the historic gold medal, Vietnam's sports have received more attention and interest from the people and government, Minister Thien said.

Hoang Cong Quang, Vinh’s father, could not hide his pride and happiness over his son’s achievement, saying that he and his family members had flocked to the airport very early to welcome Vinh.

“Vinh is a soldier. He learned to overcome all challenges and treasures what he has earned. Vinh still needs to strive forward to repay the state and the love from his fans,” Quang said.