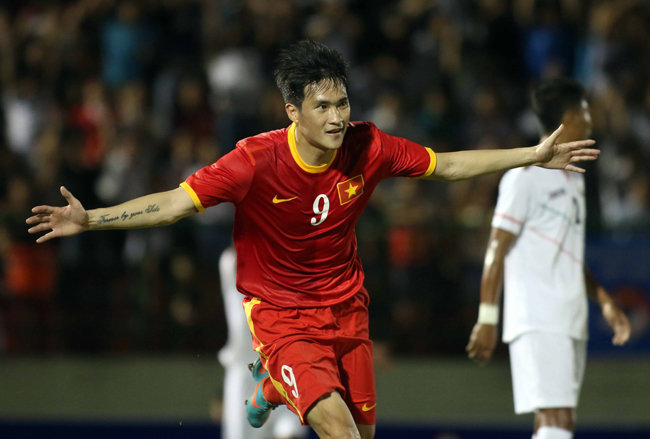 Le Cong Vinh has decided to retire from professional football as the painful wound in his heart has grown to an unbearable point, the veteran player said after Vietnam’s knockout from the AFF Suzuki Cup 2016.

Vietnam lost 3-4 on aggregate to Indonesia after two semifinal legs at Southeast Asia’s top football championship, falling short of their goal of clinching the second title after the maiden trophy in 2008.

The failure “emptied all the aspiration and devotion” Vinh holds toward playing football, so he decided to quit.

The veteran striker, earning a record 85 national caps during his career, said the wound in his heart was so deep that he chose to retire from professional football for good, not just leaving the national squad.

Le Cong Vinh, the best-ever scorer in Vietnam’s history with 51 goals under his belt, sat down for an interview with Tuoi Tre (Youth) newspaper, when he was still licking the wounds of the AFF Cup elimination.

His last match for Vietnam was the 2-2 draw against Indonesia in Hanoi on December 7, a tie that sent the visitors to the final on a 4-3 win on aggregate.

Wound too severe to heal

Vinh said his heart felt so painful after the forgettable AFF Cup journey that he no longer wants to play football, thus deciding to “end [his] career forever.”

“I would have thought twice about my football retirement had Vietnam made it to the final, as some foreign clubs had invited me to join them in the 2017-18 season,” he said.

The Vietnam Football Federation also wanted him to keep playing in 2017, as there is an important tournament then, the qualifiers of the 2019 Asian Cup, he added.

“But as I said, I could not recover from the painful failure [at the AFF Cup] because my love for the national team was too big, thus I had devoted all my life to the team,” he said.

“Except for this, we all lost in our campaigns to strike gold.

“The most painful failures were in the 2014 and 2016 editions, when we were knocked out of the semifinals as we almost got to the final.”

Vinh said failing to end his career as a winner is one of the most regretful things in his football career.

“My football life is full of ups and downs, but there seems to be more of the latter, given all the losses I had with the team,” he said.

“My career with the national team is years of sweat, tears and blood, experiences that all help me mature.

“There were times when I thought I could never stand up again but I did eventually.”

Talking of a new life without football, Vinh said he will spend more time with his family, “taking [his] daughter to school and having a rest before working on what to do next.”

In December 2014, Vinh tied the knot with local pop singer Thuy Tien, nearly two years after the couple had a daughter, in January 2013.

The press would describe Cong Vinh and Thuy Tien as the Vietnamese Becks, but both the player and singer have repeatedly called on people to treat them as any ordinary couple.

Vinh and Tien never leaked any single photo of their daughter, with the wife explaining multiple times that they do not want their fame to affect their child’s life.

Cong Vinh poses for a selfie with his wife Thuy Tien in this photo posted on the singer's Facebook page.

Asked to say some last words to his supporters, Vinh extended his thanks for all the love the fans had given him over the time.

“Thank you all for the consistent support for the Vietnamese team, no matter whether we lose or win,” he said. “I will never forget these moments for the rest of my life.”

Vinh said he is always grateful to local supporters, but cannot help feeling regret as he could not have done better to make fans happier.

“Despite the latest failure of the team, I do hope fans will keep loving and supporting the Vietnamese team, especially young players, so they can feel motivated to move forward.”