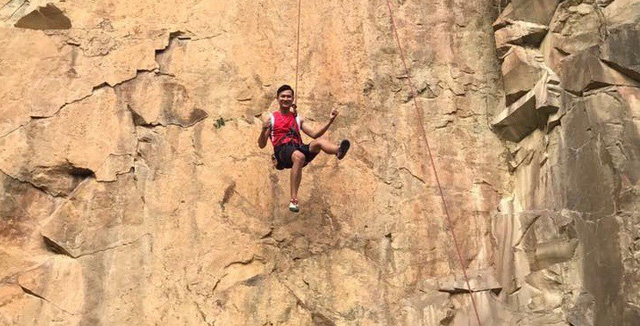 A Vietnamese man has pursued his passion of rock climbing and surmounted fears of height to become a professional trainer in the activity, leaving behind days of life limbo.

Duc Thanh does not look like a typical personal teacher with a muscular build, bright smile or rapid speech.

Instead he is thin and unamiable, speaking with a local accent in Phu Yen Province, where he was born and raised.

The 27-year-old was admitted to three schools at the same time: the Mientrung University of Civil Engineering in his hometown, Quy Nhon University in a nearby region, and Ton Duc Thang University located further afield in Ho Chi Minh City.

Thanh chose to study accounting in the last, and worked as an accountant in the southern metropolis upon graduation.

Realizing he was not cut out for the work with figures, he entertained the idea of giving up the job but held it down for fear of running into financial difficulties.

During the interlude, he invested most of his effort in his hobby of rock climbing, practicing with like-minded friends to become a trainer in the sport.

“I used to be despised by friends for being scrawny and afraid of height. To get over the low self-esteem, I began learning about rock climbing,” Thanh recalled.

The man enrolled in a course at X-Rock Climbing, a Ho Chi Minh City-based center for indoor climbing services, placing the first stepping stone on his new career trajectory.

He has had eight years of experience in rock climbing, and won one gold medal and two silvers from competitions for the sport held both at home and abroad.

“It would be a shame to shut the business down just because of minor difficulties, as its name refers to mental strength,” he joked.

To save himself, the owner started providing gear for rock climbing and activities seen in Sasuke, a Japanese sports television program whose version has appeared in Vietnam.

The enterprise experienced an upswing when the products were increasingly used by fitness centers, gymnasiums and rock climbing events, and it organized more frequent treks at mountains in Vietnam.

Despite the achievement, Thanh said it was simply in the trial stage.

He is now working as a manager at a five-story fitness facility, with his devotion going to the floor on which he teaches rock climbing, and sports involving the springboard and high bar.

He wishes to open his own fitness center for demanding sports, but for now preparations are underway.

“It’s very tiring to teach several classes a day. But I’m very happy at least because I can work in the environment I like, have a chance to learn, and lay the groundwork for things in the making.”