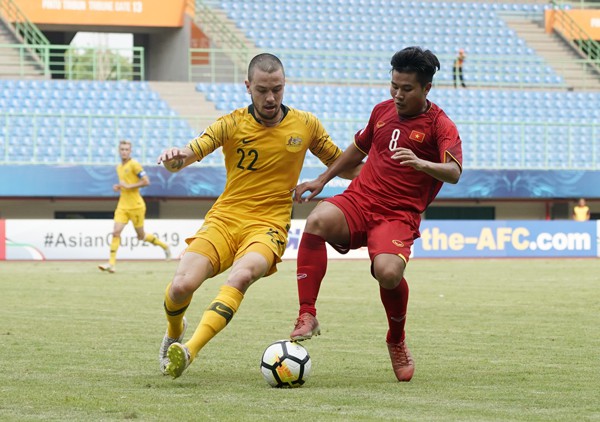 While a ‘golden generation’ of young players has brought Vietnam’s football and supporters to a new height of standards and expectations with a run of successes over the last four years, the current squads representing the country at international underage competitions just keep them in constant worries with their lackluster performances.

Concerns began to grow even bigger after Vietnam were this week eliminated from the ongoing 2018 AFC U-19 Championship in Indonesia after two consecutive losses in the group stage.

Before this continental competition, Vietnam U-19s also had to bid early farewell to the AFF U-19 Youth Championship, a playground for Southeast Asian nations, in both 2017 and 2018 in the same way – being knocked out right from the group stage.

Before the current U-19 squad, Vietnam possessed a team full of young talents that were able to secure a striking final-eight spot at the 2016 AFC U-19 Championship.

This hopeful generation then has constantly brought Vietnam many historic achievements in the continental playgrounds, including the second place at the 2018 AFC U-23 Championship in China and the fourth-place finish at the 2018 Asian Games in Indonesia.

In contrast, the current U-19 team have taken the country from one disappointment to another.

The reasons of these failures, according to football experts, are lacks of skill and experience in the young Golden Stars.

According to veteran football manager Le Thuy Hai, the current Vietnam U-19s are weak and behind their peers in the region as well as in the continent in terms of all aspects.

When it comes to physique, the ‘smaller’ Vietnamese players are unable to compete in ball fights with their much stronger opponents, Hai told news website Zing.

“For instance, as the main goalkeeper, Y Eli Nie is not good enough with his modest figure,” the veteran manager assessed, referring to the U-19 goalie, who conceded four goals in two games at the 2018 AFC U-19 Championship.

Hai noted that Nie played his best in both matches, but “to some extent, a good keeper not only needs to have good technique but also has to stand tall and big.”

Hai added that technique is another critical weakness of the 19-year-old Vietnamese players.

“I could not believe in my eyes that a player, who could make it to a continental arena, could pass the ball that bad,” he said frankly, recalling what he saw in their last two games in Indonesia.

Hai also put the former and current U-19 generations on a scale for comparison.

According to him, the former U-19s played a style of football characterized by short passing and movement and passing the ball through various channels.

“But the current generation cannot do that as they don’t have technique,” Hai said.

Hai added that no current Vietnam U-19s players could make surprise moments in a match based on technical ability like their ‘older brothers’ did.

This circumstance, according to Hai, is due to the limit of choices in player recruitment for training and development.

“All of the players recruited for the U-16 and U-19 teams in the past few years came from a small group of familiar training centers, including Viettel, Hanoi, Hoang Anh Gia Lai, Dong Thap, and PVF,” Tran Cong Minh, another former international, said, sharing Hai’s view.

It is not to mention that some local football clubs even merely call up random players just to fill the spots so that they can register for the national league, Minh told Tuoi Tre (Youth) newspaper.

“So how can the coaches of the national junior teams manage to pick out talents [from such a poor-quality source]?” he questioned.

Doan Minh Xuong, a local expert, also chimed in, saying this leads to the fact that it often takes the coaching panel a lot of time to “shape and sharpen the young amateurs into a good team with a mutual play style.”

Another major reason that makes the current young Golden Stars fall behind expectations, according to Nguyen Van Dung, a former international and deputy manager of Nam Dinh FC, is their lack of experience.

“The young players have too few chances to actually compete at major tournaments,” Dung said.

Dung estimated that “every year, one junior player has a maximum of only ten occasions to hit the pitch in the national league.”

“For the rest of the time, all they do is practice,” he said.

For all these reasons, manager Hai expressed his concerns over Vietnam’s performance in upcoming underage competitions in the region.

“It’s worrisome to let them play for Vietnam in the coming SEA [Southeast Asian] Games,” Hai said, referring to the biennial sporting contest where the men’s football competition is held for U-23 players.

For a solution to overcome the weaknesses of the U-19 team, Hai suggested taking the young players to overseas for more training.

“They must have more time playing together and be trained from the basics again, from thinking to technique,” Hai said.