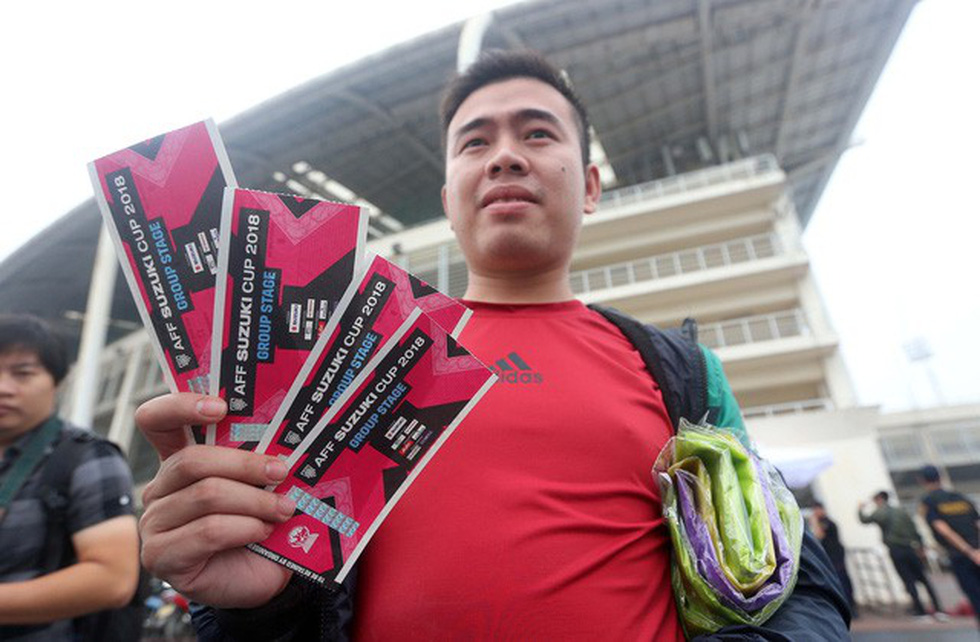 Vietnamese fans will be able to buy ticket to watch the Vietnam-Philippines semifinal at the 2018 AFF Championship online, as the country’s football governing body wants to ensure a ticket fever that occurred in the group stage earlier this month will not repeat.

Supporters have been gearing up for tickets to Vietnam’s next home game right after their beloved team sealed an easy 3-0 home win against Cambodia in their final group-stage match on Saturday.

As Group A leaders with four unbeaten games and a clean sheet, Vietnam will face Group B second-place finishers, the Philippines, in a two-leg tie in the semifinals.

Vietnam will play their first-leg semifinal on Filipino soil on December 2, before hosting the Azkals in Hanoi on December 6.

The Vietnam Football Federation (VFF) announced on Sunday tickets for the second-leg match at the 40,000-seat My Dinh National Stadium will only be available for purchase online.

VFF expects to sell about 40 to 50 percent of the available seats, equivalent to 20,000 tickets, through the Internet at https://ticketonline.vff.org.vn and https://vebongda.vff.org.vn, from 10:00 am on Wednesday to 12:00 pm the following day, or until they are sold out, according to VFF general secretary Le Hoai Anh.

The remaining 20,000 tickets will be distributed to different sources, including 4,000 invitation tickets, 3,200 tickets for the Filipino fans, tickets for numerous football fan clubs in Vietnam, and a large number of tickets to be sold to the sponsors of the Vietnamese team and the tournament, namely Suzuki, Acecook, and Yanmar.

The VFF-run websites will be the only channels where fans can officially buy the tickets, as the federation will cease direct sales and ticket sales through orders from state companies and organizations to avoid long queues and resale in the unofficial ‘black market.'

The federation appears to have drawn experience from the ticket rush before the group-stage game between Vietnam and Malaysia on November 16, when chaotic scenes unfolded at My Dinh, as a sea of fans jostled to access the only four counters there to buy a ticket.

Each person will be allowed to buy a maximum of four tickets, which have to be at the same price tier. Fans are required to have a payment card and provide phone numbers, emails, and ID card numbers when buying tickets via the online channels.

They can receive the tickets at home via delivery services for VND29,000 ($1.25) per customer, or directly at the VFF headquarters in Hanoi.

VFF said it will deliver the tickets to online buyers from 9:00 am to 4:30 pm every day, starting from Friday - one day after the ticket sales end - until December 2.

While fans back the online ticket sales, some are wondering if the technical infrastructure of the VFF websites is good enough to serve a large volume of Internet traffic at the same time when the ticket sales officially start.

They have every reason to worry as the official website of the VFF, vff.org.vn, was inaccessible for hours on Monday.

Visitors were greeted with an error message saying, “The vff.org.vn page isn’t working," according to news site Zing.vn.

“After some attempts, I could reach the homepage but when I clicked to read an article, it only showed a blank page,” Huu Quang, an office worker in Ho Chi Minh City’s District 11, told Zing.vn of his difficulty accessing the VFF website.

Even the main ticket sales websites, https://ticketonline.vff.org.vn and https://vebongda.vff.org.vn, were inaccessible on Monday, according to the Cong An Nhan Dan (People’s Police) newspaper.

VFF apparently acknowledged the issues and all the three websites went back online on Tuesday.