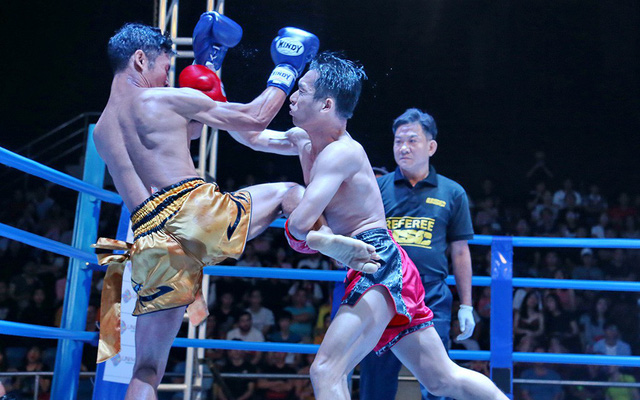 A Vietnamese fighter became the champion of an international Thai boxing tournament held in Ho Chi Minh City on Sunday – an event that livened up the sports scene of a country all so familiar with poor audiences around boxing rings.

Such success was also seen in the light flyweight category of 49 kilograms, where Vietnamese champion Le Hoang Duc was able to defend his title against China’s Ying Dong Ye.

The professional competition, taking place for the second time in Vietnam, was joined by fighters from other Asian countries such as Cambodia, China, Iran, Laos, Malaysia and Thailand.

Spectators flocked to the boxing ring in droves but excitement is rarely noticed at similar events in Vietnam, where most domestic combat sport matches are watched by a modest number of people, the majority of whom are the fighters’ relatives.

While the event continued into the late night, over 1,000 spectators came, many of whom passed the gymnasium by chance but decided to buy an entrance ticket after hearing thrilling noise that blared out.

Vietnam’s combat sports are regarded as lacking professionalism, as the country has gone out of its way to bring home judo and taekwondo medals from the Olympic Games, Asian Games, or Southeast Asian Games while these events are considered amateurish to the world of combat sports.

Gold medalists from these events usually receive financial rewards from the government only.

The second Uni Super Championship Muay Thai Tournament had an electrifying atmosphere probably because it allowed no protective equipment.

In this way, adrenaline ran high when spectators saw sweat at times mixed with blood following hard punches in spectacles they had only often witnessed in boxing matches on television.

The crowd did not fail to be captivated by ring girls that appeared during round breaks.

Giap Trung Thang, head of the Ho Chi Minh Muay Thai Federation, said the organization’s purpose in holding the tournament was to create an entertainment space for spectators instead of a boxing ring for fighters only.