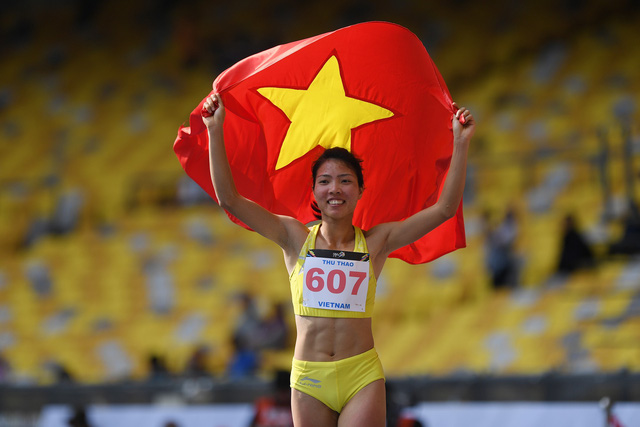 Long jumper beats footballer to be Vietnamese ‘athlete of the year’

Vietnam may be the new kings of Southeast Asian football after their winning the 2018 ASEAN Football Federation (AFF) Cup in mid-December, but local journalists on Thursday voted a player of track-and-field, or the ‘queen of sports,’ as the country’s 2018 Athlete of the Year.

Long jumper Bui Thi Thu Thao, 26, outplayed nine other outstanding candidates in a poll voted by nearly 200 sports reporters of newspapers across the country to become the number-one athlete of Vietnam this year.

Thao topped the list of ten most outstanding Vietnamese athletes announced after the voting process for the 2018 Athlete of the Year awards on Thursday.

Also at the 2018 Asiad, Hoang, 18, claimed a surprising silver medal in the men’s 1,500m freestyle, setting a new height for Vietnam’s swimming in Asian Games.

In the meantime, Hai is the winner of the 2018 Vietnam Golden Ball, the country’s most prestigious individual football award.

Two of Hai’s teammates, Nguyen Anh Duc and Tran Dinh Trong, came at the ninth and tenth places on the Athlete of the Year list.

The three all played at the 2018 AFF Championship, which wrapped up with Vietnam lifting the trophy in Hanoi on December 15. Hai was the tournament’s Most Valuable Player, whereas Anh Duc was Vietnam’s top scorer.

Thao said after the voting result was announced that she did not think she could surpass the 2018 AFF Cup winners in this award, even though she herself is an Asian Games gold medalist.

“Football is the favorite sport in Vietnam, while track-and-field is a ‘quieter’ sport in the country,” the long jumper explained.

“Besides, Hoang is still young but he has shown a high level of profession at all the competitions that he participated this year.”

Thao said she was extremely “happy and surprised” knowing that she had won recognition from the press to be voted as Vietnam’s No. 1 athlete in 2018.

The poll to vote for Vietnam’s most excellent athletes and coaches of the year was organized by The Thao Viet Nam (Vietnam Sports) newspaper from 8:00 am to 12:00 pm on Thursday.

Long jumper Thao is practicing for the upcoming Southeast Asian (SEA) Games, a biennial regional multi-sport event, hosted by the Philippines from November 30 to December 11, 2019, while the national football squad are preparing for an international friendly with the Philippines on December 31.