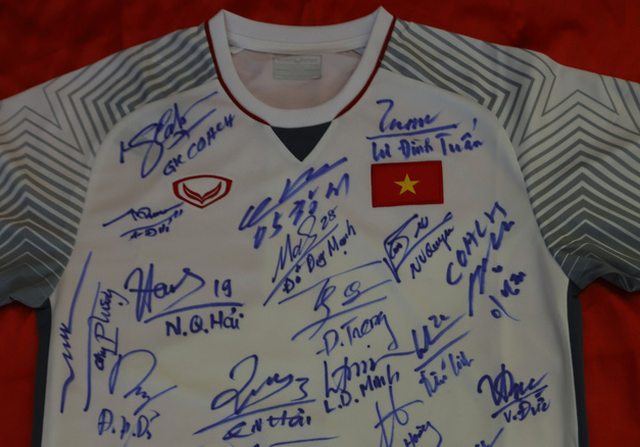 Jersey, ball signed by Vietnam’s ASEAN Cup winning squad to be put up for auction

A jersey and a ball bearing signatures from the entire Vietnam’s national football squad that was gifted to Prime Minister Nguyen Xuan Phuc following the team’s victory at the ASEAN championship last month is set to be put up for auction at a starting price of VND15 billion (US$645,000).

The Vietnam Red Cross announced on Thursday that PM Phuc had gifted the two items to the organization so that they could be auctioned off ahead of the upcoming Lunar New Year holiday to raise money for victims of Agent Orange.

Vietnam’s national football team have recently marked up a slew of achievements, most notably their stunning first place finish at the 2018 ASEAN Football Federation Championship.

The ball and jersey up for bid each bear the signatures of the entire championship team as well as South Korean head coach Park Hang-seo.

Tam Tin Nghia, the private consulting company contracted to run the auction, has set the starting price for the two items at VND15 billion, according to the Red Cross.

Individuals and organizations wishing to participate in the auction are asked to purchase registration papers for the event for VND500,000 ($21.5) and make a VND1.5 billion ($64,500) deposit.

Those who wish to view the items can visit the Cultural Friendship palace in Hanoi from January 7 to 12 before the auction, set to be broadcast live on national television network VTV at 6:00 pm on January 13.