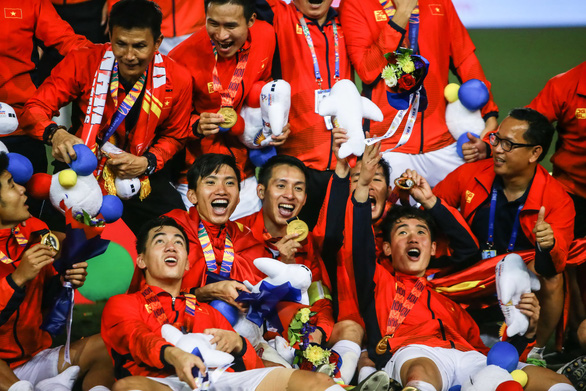 Diplomatic missions in Vietnam have joined locals to celebrate their gold medal in men’s football at the 2019 Southeast Asian (SEA) Games on Tuesday.

In the final match of the men's football category at Rizal Memorial Stadium in Manila, Vietnam beat Indonesia 3-0, claiming their first-ever gold medal in 60 years.

Fans across the country stormed the streets to celebrate their long-awaited gold medal after the match ended.

Meanwhile, foreign diplomatic missions in Vietnam had their own special way to celebrate the historic run.

“VIỆT NAM VÔ ĐỊCH!!!” the Consulate General of France in Ho Chi Minh City’s verified Facebook account updated its status in Vietnamese, which means “Vietnam [are] the champions,” right after the final whistle.

The U.S. Embassy in Hanoi and the Consulate General in Ho Chi Minh City chose to show their support for the Vietnamese football team before the game started.

“Good luck tonight, guys! We are looking forward to seeing the change of your medal's color. Go Vietnam!” the U.S. Embassy wrote on a pinned post on Tuesday.

“We're so READY, are you?” the U.S. Consulate General in Ho Chi Minh City captioned a photo of their staff excitedly watching the game.

Some members of the staff could be seen wearing Vietnamese conical hats while others held a Vietnamese flag on the background of the photo.

Meanwhile, the Embassy of Canada in Hanoi also updated their Facebook status on Wednesday morning.

“The Embassy of Canada in Vietnam would like to congratulate Vietnam’s U22 men's soccer team on their historic victory at SEA Games 2019.”

The message was posted with a video shared from Amazing Things in Vietnam, capturing fans storming the streets in celebration.

“For the first time, Vietnam has won the Gold medal in men's football at SEA Games!!!” the British Embassy in Hanoi posted on Facebook on Tuesday.

“Congratulations to coach Park Hang Seo and the U22 men’s football team on this convincing victory, 3-0, against Indonesia!”

The embassy also highlighted Vietnam’s double gold medals in men's and women's football at the 30th SEA Games, as well as almost 100 other “gold victories” in other sports.

Earlier, the Vietnamese national women’s football team won their sixth SEA Games gold medal on Sunday after defeating Thailand 1-0 in the women’s football finale, with the other five claimed in 2001, 2003, 2005, 2009, and 2017.

“You did it! Congratulations to Vietnam’s U22 men’s football team on winning your first-ever SEA Games gold medal tonight!” the Australian Embassy in Hanoi joined the celebration with a message posted to its Facebook account, attaching a photo credited to Tuoi Tre (Youth) newspaper’s photojournalist Nguyen Khanh.