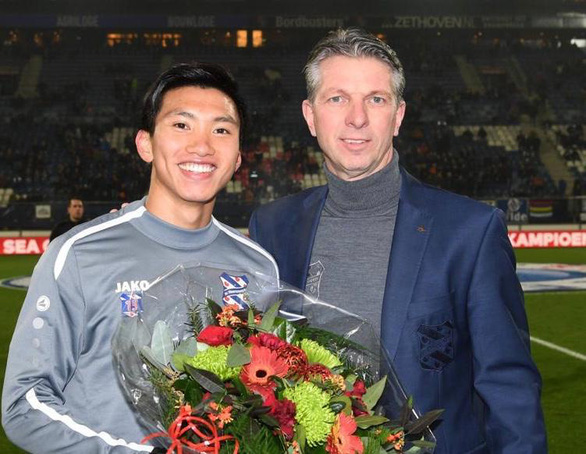 Vietnam international Doan Van Hau, who currently plays for SC Heerenveen in the Netherlands’ top-flight league, was honored by the Dutch side in a short ceremony at their home stadium on Friday for winning the 2019 Southeast Asian (SEA) Games gold medal.

Hau scored twice in the finale of men’s football at the Games in the Philippines earlier this week to help the junior Golden Dragons defeat Indonesia 3-0 and clinch their first-ever SEA Games gold medal in the category.

Upon his return to SC Heerenveen, the club spent a decent amount of time preceding their home game against Willem II paying tribute to the 20-year-old defender for his achievements with the junior national team.

Gerry Hamstra, director of football of the Dutch club, gifted Hau a bouquet in the flashes of cameras capturing the moment.

At the same time, the big screen at SC Heerenveen’s home stadium of Abe Lenstra Stadion played the goals the Vietnamese scored in the finale.

Video of Vietnam's Doan Van Hau getting honored by the Dutch club SC Heerenven on December 13, 2019

Prior to the short ceremony, the Dutch side had also showed their acknowledgement of Hau’s good performances in his junior national teams via different posts on the club’s official Facebook page.

Hau is the first-ever Vietnamese footballer to play in the Netherlands after he was loaned by his club Hanoi FC to SC Heerenveen on a one-year term in September.

Hau has since played an important part in the Vietnamese teams in several tournaments, including the 2019 SEA Games hosted by the Philippines from November 31 to December 11.

Vietnam U22s were the only unbeaten side in Games men’s football, from the group stage to the final game for the gold medal.