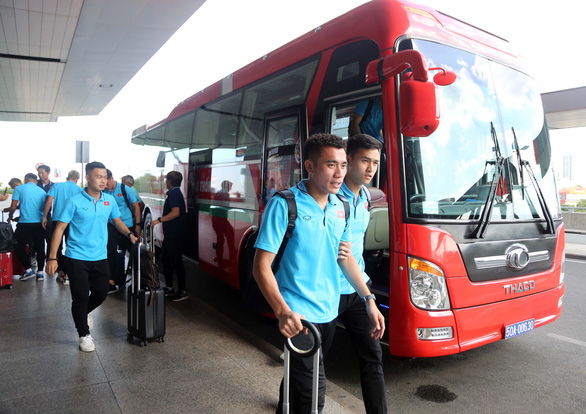 Team Vietnam leaves for Thailand ahead of 2020 AFC U23 Championship

Team Vietnam’s head coach Park Hang Seo and his U23 team departed for Thailand on Wednesday afternoon in preparation for the 2020 AFC U23 Championship.

After a training session at Thong Nhat Stadium in District 10, Ho Chi Minh City on Wednesday morning, the squad headed to Tan Son Nhat International Airport for a flight to Bangkok and were welcomed at the international terminal by a crowd of fans asking for photos with them.

Vietnam U23s are scheduled for a friendly with Bahrain U23s in the Thai capital on Friday, a match coach Park will likely use as a metric to choose 23 players from his 25-man squad for the 2020 AFC U23 Championship.

The championship is an international football tournament that has been held by the Asian Football Confederation (AFC) every two years since 2014.

This year’s event will take place at four venues in Thailand between January 8 and 26, featuring 16 teams from across Asia.

Vietnam, the tournament’s 2018 runners-up, are in Group D alongside Jordan, the UAE, and North Korea.

The three games will be broadcast live on national TV channel VTV6.

The Vietnamese finished second in the 2018 edition after a snowy final showdown with Uzbekistan, where they lost 1-2 in extra time.