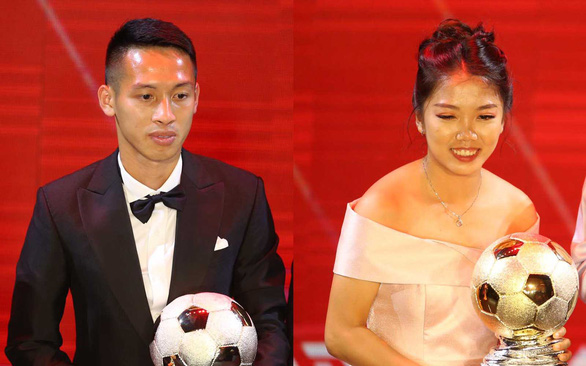 Midfielder Do Hung Dung and forward Huynh Nhu, who captained Vietnam’s squads that won double gold medals in men’s and women’s football, respectively, at the 2019 Southeast Asian (SEA) Games, were named winners of the 2019 Vietnam Golden Ball, the country’s most prestigious individual football awards, on Tuesday.

The three all played at the 2019 SEA Games in the Philippines, which wrapped up with Vietnam lifting the trophy in Manila after a 60-year dry spell.

Hai suffered from an injury in the tournament’s group stage and was benched for the rest of Vietnam’s run, while Dung put in an outstanding performance in his vital role as the team’s captain.

Nhu, Kieu, and Dung were key players in the Vietnam national team, helping the country claim the first place in women’s football at the SEA Games for the record sixth time in the Philippines.

In the 2019 ASEAN Football Federation (AFF) Women's Championship in August last year, the team clinched their third AFF title after beating hosts Thailand 1-0 in the finale.

They also finished 2019 in the top 32 of the FIFA Women’s World Rankings.

The team also made it to the final round of the FIFA Olympic Qualifying 2020, where they were eliminated by Australia in the last play-off.

South Korean Park Hang Seo and Vietnamese Mai Duc Chung, who are the managers of the national men’s and women’s teams, respectively, were honored with a special prize recognizing their contributions to Vietnamese football.

The Vietnam Golden Ball has been given annually by the Sai Gon Giai Phong (Liberated Saigon) daily newspaper since 1995 to recognize the efforts of players who have contributed to the popular sport in the Southeast Asian country.