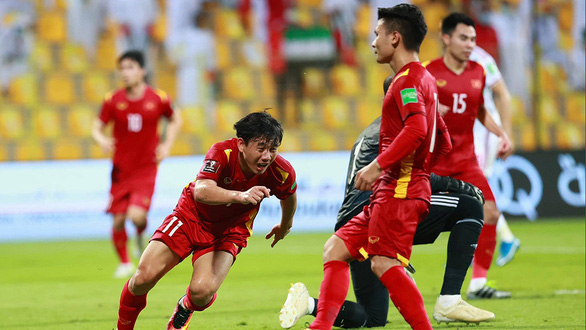 Vietnam have advanced for the first time in their history to the final qualifying round for the 2022 FIFA World Cup on Qatar despite losing their last group stage game to the UAE on Tuesday.

The Vietnamese booked a place in the Asian qualifiers final round as one of the five best group runners-up.

They qualified even though they suffered a 2-3 defeat at the hands of the UAE in their last Group G game at Zabeel Stadium in Dubai.

In the end, the Southeast Asian team earned 17 points from eight games, one point adrift of the UAE at the summit.

The hosts overpowered the Golden Stars in most of the game, eyeing a revenge for their minimal loss in the first leg in Hanoi two years ago.

Vietnam played with a low formation to inhibit the Emiratis’ offense but they could not hold it for long.

Abdullah Ramadan delivered an overhead pass to central midfielder Ali Salmeen, who properly sneaked behind the Vietnamese defensive wall to fire home the opening goal 32 minutes into the match.

Ali Ahmed Mabkhout stepped up to convert from the spot after goalie Bui Tan Truong fouled onrushing Khalil Ibrahim Al Hammadi in the box under tremendous pressure from the hosts.

Mahmoud Khamis Alhammadi netted a third goal five minutes into the second half with a diving header following Truong’s first attempt to block another header from close range.

Vietnam fielded five substitutes before they snatched back two consolation goals in the remaining minutes.

Vuong scored a goal himself in the dying moments of injury time after a series of short passes between the Vietnamese players who had stolen the ball from the distracted hosts.

A draw for this round will be held in Malaysia on June 24. Matches are slated to kick off in September

The first two teams in each group will qualify for the FIFA World Cup finals in Qatar next year.

The two third-placed teams will compete for a ticket to the inter-confederation play-offs, which will be played in June 2022.