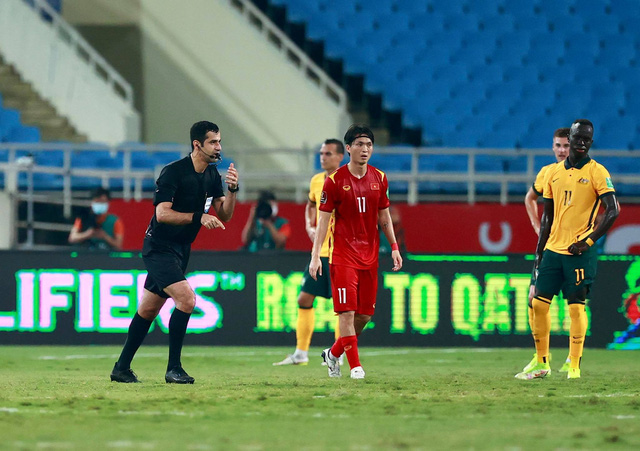 The Vietnam Football Federation (VFF) has called on the International Federation of Association Football (FIFA) and the Asian Football Confederation (AFC) to step up their inspection and assessment of the quality of referees as it complained about a decision in Vietnam’s latest World Cup qualifying game against Australia.

In a letter addressed to FIFA President Gianni Infantino and AFC President Salman Bin Ibrahim Al-Khalifa, VFF Deputy Chairman Tran Quoc Tuan extended his thanks for their support in organizing the Vietnam - Australia match on Tuesday at My Dinh National Stadium in Hanoi, particularly given the complexities brought about by the COVID-19 pandemic.

The VFF supports and appreciates the FIFA and AFC’s decision to use a video assistant referee (VAR) in matches in the final stage of the 2022 FIFA World Cup Asian qualifiers, he said, adding that Tuesday’s game was the first game that VAR had been applied in an official international football event hosted by the Vietnamese football governing body.

However, the VFF believes that the referee made inaccurate decisions in the Vietnam - Australia match that affected the game’s eventual result.

So the VFF calls on the two organizations to strengthen their inspection and evaluation on the quality of referees as part of a bid to ensure effective officiating in upcoming matches, as well as to protect the image and prestige of the final round of the FIFA World Cup qualifiers.

The Golden Dragons could have had a penalty in the 29th minute, but referee Abdulrahman Al Jassim ruled Grant’s block of a shot by Nguyen Phong Hong Duy was not handball.

Tuesday’s result placed Vietnam in fifth and Australia on top of Group B, after two matches of the third stage of the qualifiers.

Vietnam will face China on October 7, while the Socceroos will play Oman.

There are two groups of six nations in the final round of Asian qualifiers for the 2022 FIFA World Cup.

The top two teams from each group will qualify for the tournament next year while the third-place teams could still make the cut via an inter-continental play-off.