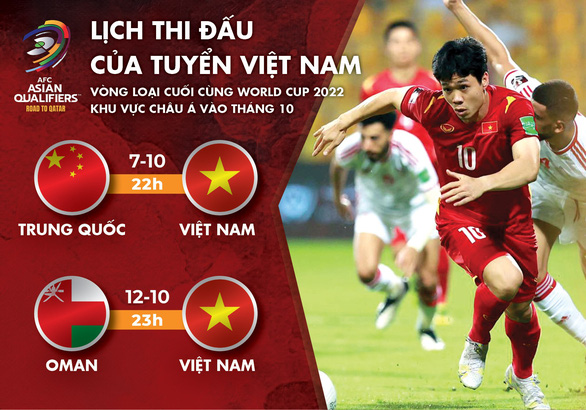 Vietnam to compete in UAE, Oman in next phase of World Cup qualifiers

Vietnam’s next two games in the final stage of the 2022 FIFA World Cup Qualifiers for Asia will take place in the UAE and Oman, according to the Asian Football Confederation’s announcement on Tuesday afternoon.

The Golden Stars will take on China at Sharjah Stadium in the UAE at 10:00 pm on October 7 before playing as the away side against Oman at Sultan Qaboos Sports Complex at 11:00 pm on October 12 (all Vietnam time).

The team and their head coach Park Hang Seo set a target to get points from the games as the class gap between them and the two opponents is not too large.

Vietnam slid from 92nd to 95th in the FIFA rankings’ latest update following their two respective 1-3 and 1-0 World Cup qualifier losses to Saudi Arabia and Australia earlier this month.

Meanwhile, China fell from 71st to 75th and Oman ascended one place to 78th.

Vietnam are currently in the fifth place of Group B, which also includes Japan, Australia, Saudi Arabia, China, and Oman.

The top two teams from each group will qualify for the tournament next year while the third-place teams could still make the cut via an inter-continental play-off.