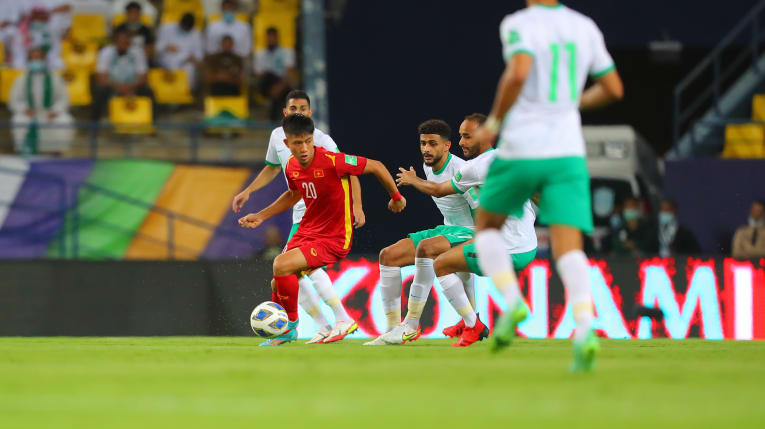 HONG KONG -- Saudi Arabia survived a major scare to hand 10-man Vietnam a 3-1 defeat in Group B of the final round of Asia's preliminaries for the 2022 World Cup as Australia beat China 3-0 on Thursday.

The Saudis, who appeared at their fifth World Cup finals in Russia in 2018, needed a penalty from Salem Al Dawsari after Do Duy Manh's red card to draw level against a Vietnam side making the country's first appearance at this stage of qualifying.

Nguyen Quang Hai had given Park Hang-seo's side a third- minute lead with a sweet left-foot shot that silenced the Mrsool Park crowd in Riyadh.

The Vietnamese held out despite concerted Saudi pressure until the 54th minute when Duy Manh was judged to have handled while sliding in to block Salman Al Faraj's shot at goal.

The offence earned the defender a second yellow card and, after Al Dawsari rolled his spot-kick past Bui Tan Truong, a Saudi victory always looked likely.

Meanwhile, two goals in two first-half minutes gave the Australians the upper hand after China had controlled the opening exchanges at the Khalifa International Stadium in Doha.

Awer Mabil put the Socceroos in front from close range as Tyias Browning failed to clear Martin Boyle's lofted ball into the box.

Boyle doubled the lead when the Hibernian winger beat Yan Junling with a low shot and substitute Mitchell Duke added the third.

Australia and Saudi Arabia joined Oman at the top of Group B after Branko Ivankovic's side handed Japan a surprise 1-0 defeat earlier in the day.

Iran lead Group A thanks to Alireza Jahanbakhsh's deflected strike, which earned Dragan Skocic's side a 1-0 win over Syria in Tehran.

The Feyenoord forward met Mehdi Taremi's layoff with a right-foot strike before the ball ricocheted off the outstretched leg of Thaer Krouma and beat Ibrahim Alma.

With South Korea drawing 0-0 against Iraq in Seoul and the United Arab Emirates held to a scoreless draw by Lebanon, the Iranians top Group A with three points.

The top two in each of the six-team groups are guaranteed to progress to the World Cup finals in Qatar with the teams in third place entering a series of playoffs for a possible fifth Asian berth.