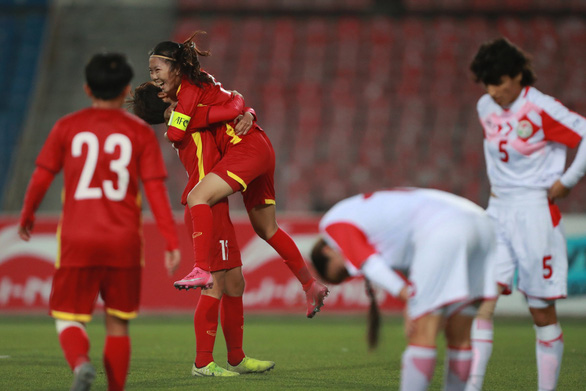 Vietnam confirmed their place at the AFC Women’s Asian Cup India 2022 after snatching a 7-0 victory over Group B hosts Tajikistan in their final qualifying match on Wednesday.

Sitting over 100 notches above Tajikistan in the FIFA rankings, Vietnam seized control from the start of the match.

Pham Hai Yen, who scored six goals in the Golden Stars’ 16-0 win over the Maldives in their group opener last Thursday, netted Vietnam’s first goal in the 14th minute.

Vietnam spent the next 28 minutes squandering a number of opportunities before Bich Thuy found the back of Tajikistan’s net in the 42nd minute.

The Southeast Asian representatives continued to dominate the match, with Huynh Nhu beating goalkeeper Saiyora Saidova from the spot in the 51st minute after Hai Yen had been fouled in the box.

Vietnam’s fifth goal arrived in the 73rd minute when Hai Yen took her personal tally to two for the night and eight for the week.

With six minutes left, Hoang Thi Loan and substitute Nguyen Thi Van etched their names on the scoresheet as Vietnam sealed a convincing 7-0 victory to become one of the 12 teams at the AFC Women’s Asian Cup India 2022.

The cup, set to take place from January 20 to February 6, will be the 20th edition of the quadrennial international football tournament in Asia.

The qualifying round includes 28 teams divided into eight groups –  three groups of four and five groups of three – with each team battling it out for eight top spots in the main event.

2018 champions Japan, runners-up Australia, third-placed China, and India – this year’s hosts – have all qualified for the championship.

The AFC Women’s Asian Cup India 2022 will also serve as the final stage of Asian qualification for the 2023 FIFA Women’s World Cup, with the top five teams advancing directly while two more teams will book places in the inter-confederation play-offs.