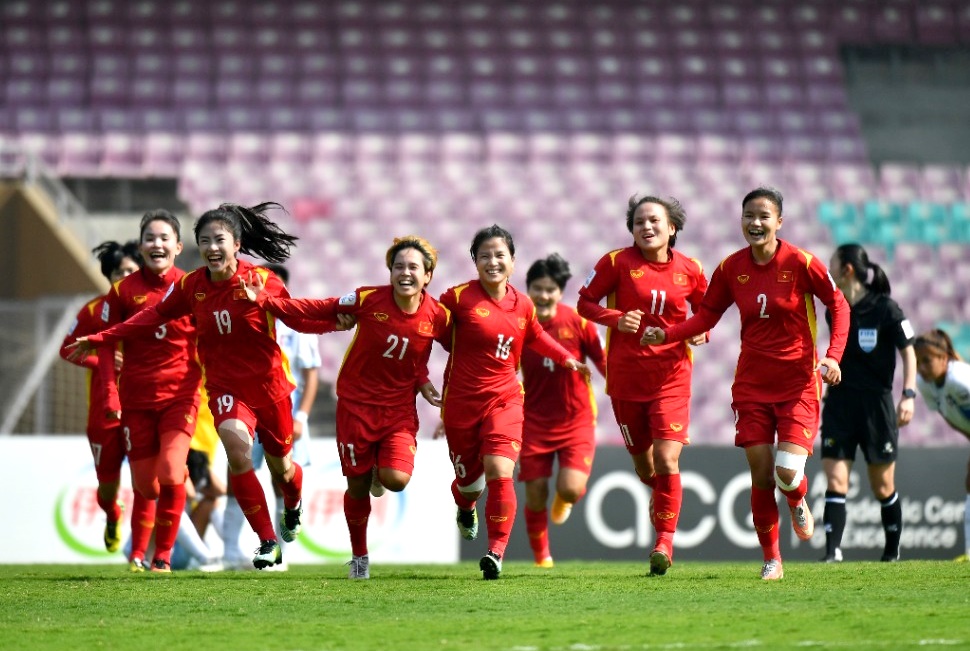 The Vietnamese national women’s football team will be given about VND10 billion (US$441,501) and a number of valuable rewards following their victory against Chinese Taipei in the play-offs of the 2022 AFC Women’s Asian Cup in India on Sunday.

The Vietnamese women’s team are expected to return to Vietnam from India on Thursday, according to the Vietnam Football Federation (VFF).

Following their milestone achievement, the VFF has pledged to reward the team with VND5.5 billion ($242.6 million) and a number of enterprises have also promised VND4 billion ($176.4 million) in rewards through a call from Prime Minister Pham Minh Chinh.

Many other individuals, organizations, and companies have promised to honor the team with monetary rewards that have yet to be fully calculated and are expected to pile up in the coming days.

On Sunday, State President Nguyen Xuan Phuc sent his congratulations to the national women’s football squad for their remarkable journey as they overcame a COVID-19 outbreak prior to the 2022 AFC Women’s Asian Cup in India to book their place in the FIFA Women’s World Cup.

In the same move, FIFA also lauded the Vietnamese women on its website, saying “Vietnam saved their best football at the continental showpiece for these play-off matches” and hailing their triumph as “a deserved and historic win in Navi Mumbai.”

Vietnam were beaten 3-1 by China in the quarterfinals of the AFC Women's Asian Cup after losing out to Japan and South Korea in the group phase earlier.

They enjoyed a 2-0 win over Thailand – participants at the FIFA Women’s World Cup France 2019 – on Wednesday before entering Sunday’s game, needing nothing less than a victory to secure their automatic qualifying spot.

Their place was sealed with a 2-1 victory over Chinese Taipei – the other competitors in a repechage play-off series at the Asian finals – who will now join Thailand in competing at next year’s inter-continental play-offs.

Besides Vietnam, the other Asian qualifiers for the 2023 FIFA Women’s World Cup include China and South Korea, who contested the Asian Cup finale later on Sunday, with the crown going to the former after a 3-2 triumph, Japan, the Philippines, and Australia – eliminated in the last eight but guaranteed a spot as co-hosts.