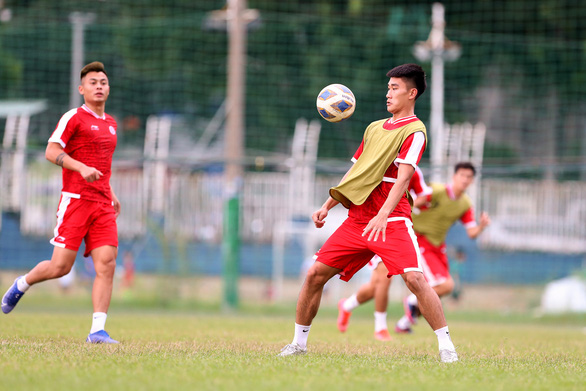 Many experts expect that young talents of Hanoi-based Viettel FC will be given more game time in the upcoming group stage of the 2022 AFC Cup to prove themselves.

As Viettel’s capability is considered to be superior to that of the other three, the tourney will be an opportunity for coach Bae Ji Won, who just signed with the Vietnamese football club in January and took over from his predecessor Truong Viet Hoang on June 17, to test the club’s young players.

Viettel possess many young talents, four of whom made major contributions to the U23 Vietnamese team at the 2022 AFC U23 Asian Cup, which just concluded earlier this month.

Left-back Phan Tuan Tai scored one goal and contributed two assists while Nham Manh Dung, a versatile player who can be fielded as a striker or a center-back, came away with one goal.

Forward Khuat Van Khang won the MVP title of the 1-1 tie between Vietnam and South Korea, who were the defending champions back then at the U23 Asian Cup, while defender Nguyen Thanh Binh captained the Vietnamese team’s defense line.

However, with Viettel’s current line-up of many experienced, in-form players, such as Nguyen Hoang Duc, Ho Khac Ngoc, Nguyen Duc Chien, Caíque Venâncio Lemes, Pedro Paulo, and Geovane Magno, it remains a question if coach Bae will be open to experiments.

In the last four rounds of Vietnam’s top-tier V. League 1 2022, Nham Manh Dung merely played 60 minutes on the field in only one game.

Nguyen Huu Thang, who failed to secure a slot in the official line-up of the U23 Vietnamese team at the recent Southeast Asian Games, which took place in Vietnam in May, and the U23 Asian Cup due to his bad form, just played as a substitute for a total of 55 minutes in two games at the V. League 1 2022.

Many football pundits believe that more game time at the upcoming 2022 AFC Cup will be necessary for Thang to improve his performance.

In recent training sessions, it seems that coach Bae is trying to combine the young and experienced generations together to prepare for the 2022 AFC Cup, according to center-back Nguyen Duc Chien.

“We are creating a bond between the young players and the mainstay,” Chien told local media recently.

“They have made breakthroughs in recent international tournaments, which are expected to be helpful to Viettel."

The 2022 AFC Cup is the 19th edition of the AFC Cup, Asia’s secondary club football tournament organized by the Asian Football Confederation (AFC).

The group-stage matches of the ASEAN Zone are scheduled to take place at Thong Nhat Stadium in Ho Chi Minh City on June 24, 27, and 30.