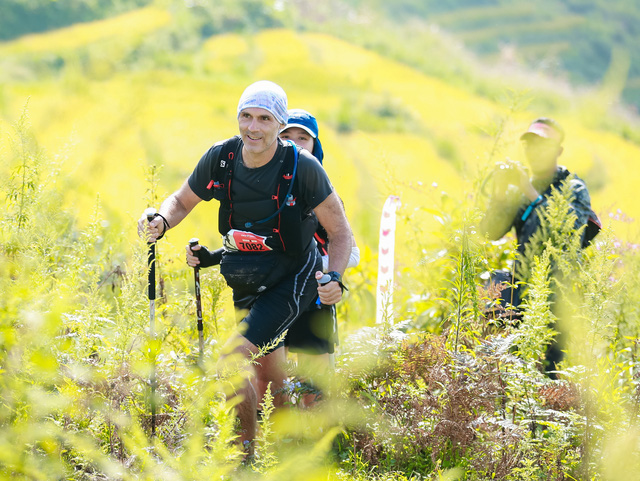 More than 5,300 athletes from 48 countries and territories have participated in the 2022 Vietnam Mountain Marathon (VMM2022), which takes place in Sa Pa Town, Lao Cai Province from Friday to Sunday.

The race was introduced in 2013 and has been annually organized by Danish adventure travel agency Topas Travel.

This year is the first time that Topas Travel has had athletes run a distance of 160km, which is four-fold a normal marathon race.

The participants in this race started at 4:00 am on Friday and are expected to reach the finish line by midnight of Saturday, according to the organizer.

They will have to run continuously for approximately 44 hours through the overlapping mountains of the Hoang Lien Son range, overcoming a total altitude equivalent to conquering Mount Everest.

The route will take the athletes through villages of Vietnamese ethnic minorities, terraced fields in Sa Pa that are near the harvest season, and a series of magnificent mountain and forest scenery.

Most of the 5,300 athletes participating in the VMM2022 are amateur and semi-professional, who come from all walks of life, such as office workers, engineers, scientists, and business people, and share a passion for running.

Jean Henri Haniquaut, a French runner who has attended six other 160km races around the world, expressed his exhilaration for the 160km distance at the VMM2022.

“I am looking forward to discovering the beautiful natural scenery that I have only seen on Instagram,” Haniquaut said.

Vietnamese-American Chau Smith, 75, is another special participant, who has run more than 100 marathons around the world, including the arduous annual Triple7Quest challenge in 2017, which required considerable legwork on seven continents.

She has registered for the 42km race length at the VMM2022.

Topas Travel has raised nearly US$350,000 from marathon races like the VMM2022 under a system called Vietnam Trail Series.

The organizer said the registration fees from the athletes will be partly used for charity projects in Sa Pa.